Caterham has has announced its fastest and most powerful Seven ever, the Superlight R600. 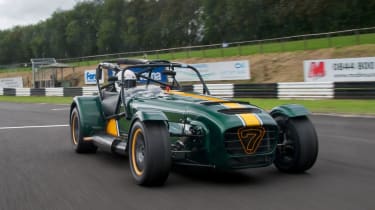 Caterham has confirmed the supercharged R600 track-car, which the company is claiming to be the fastest Seven it has ever created. It’s the first factory built supercharged Seven, and it will provide further progression in the Caterham race series, stepping in to take drivers in from the current top level R300 series.

The car is powered by a 2.0-litre Ford Duratec engine, which has been supercharged to produce 275bhp – similar to the setup in the SP/300.R. This is mated to a six-speed sequential gearbox, with a Titan limited-slip differential. Avon racing slicks complete the package.

With 200lb ft of torque, the new model produced 13 percent more torque than the R500 road car. Caterham claims it provides ‘an increase in aggressiveness, although the linear power delivery of the supercharged engine makes it superbly driveable’.

Currently, there are several different Caterham race series, with racers progressing right through the Academy, Roadsport, Tracksport, Supersport and R300, the current top level series. The new R600 will provide room for the current top R300 racers to progress further.

Caterham is expecting at least a 16-car grid for the debut championship season in 2013, with 30 cars anticipated to compete the following year. The R600 race car will cost £44,995 complete, with the upgrades available to current R300 owners.