Caterham’s Academy is set for its most successful year 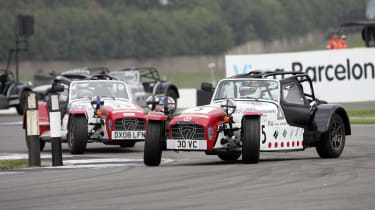 The company has had to add a third grid to the 2009 race series – the first time in the Academy’s 13 year history that demand has been this high. The novice-based championship has been running for 13 years, and the 56 grid places traditionally sell out before the end of the summer before the race season. This year though, spiralling demand has meant another 28 places have been squeezed in – and eight of them have gone already. Entry costs £17,995, with the race package including a 125bhp Caterham 7 Roadsport in component form, seminars and events to help you build and race-prepare your 7, your racing licence and seven championship events – with all entry and registration fees taken care of. There’s also a handling day to hone your skills ready for competition. Throw an extra three grand at Caterham and it’ll build your Roadsport for you. The Academy race series runs from April to October, and if it really gets under your skin then a few minor mods to the Academy 7 make it eligible for the next level of Caterham racing – Roadsport B class.