Seven stable mate to be designed by online communities 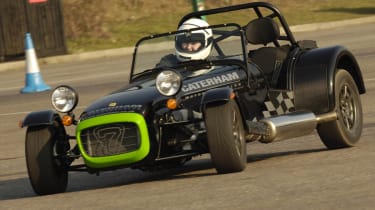 Remember the Caterham 21? We wouldn't be surprised if you don't - it was the company's attempt to add a second model to the range, but it played second fiddle to the legendary 7 and barely any were produced. An undetered Caterham is having a stab at an all-new car again, though, with different tactics to try and ensure a more successful model this time around.

It's working with Project Splitwheel to design the car online - with the help of anyone who chooses to register on the website and air their views and ideas. They hope an online community will form, with lots of people discussing what they'd like from a new Caterham before their ideas are turned into designs that they can vote on.

Everything from the chassis and power source (including alternative fuels and methods) to styling and the model's name are up for discussion, meaning the car will (hopefully) be honed and developed by its target market. Production is expected to start in 2011, by which point Caterham will have been making the 7 (pictured) for nigh-on 40 years.

"Creating a worthy stable mate for the iconic Caterham 7 is one of the greatest challenges in the automotive world," says Ansar Ali, MD of Caterham Cars, "and one which will be hugely exciting for enthusiasts to get stuck into!"

If you want to have your say and take part, hit the website and register. The 7 is one of the icons of evo's last ten years, so we'll be following this one with a lot of interest - so stick with us for all the latest on Caterham's all-new car.