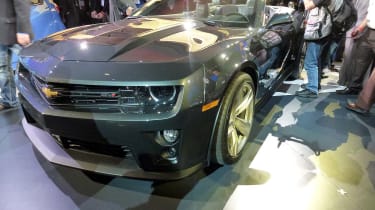 One of the big stories at the Los Angeles motor show was the return of a very old fashioned power battle, as Ford and Chevrolet both revealed distinctly over-engined sports cars.

And although most attention was won by the blue entry – the Ford Shelby Mustang GT500 and its claimed 202mph top speed – GM’s entrant looks very nearly as spectacular on paper. The new Camaro ZL1 – revealed at LA as a cabriolet, although a coupe will also be offered – is powered by a 580bhp supercharged 6.2-litre V8 that’s claimed to be capable of blasting from rest to 60mph in just 3.9 seconds.

As you’d hope, the ZL1 has been substantially re-engineered from the standard Camaro roadster, with body reinforcement including a fat strut brace at the front end and additional underbody reinforcement. It comes with adaptive dampers and will be going on sale in the ‘States early next year, priced at around $57,000.

There’s no official word as to whether the ZL1 roadster, or its coupe sister, will make it to the UK – although if either does they will likely be imported in tiny volumes.