2016 Chevrolet Camaro is fastest ever 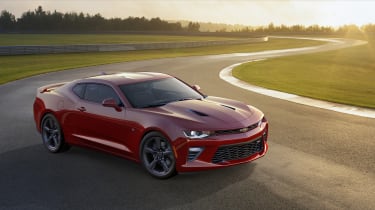 Chevrolet has unveiled the sixth-generation Camaro in Detroit, confirming it’ll be the most powerful incarnation of the long-standing muscle car ever produced. Equipped with the range-topping 6-litre small block V8, the Camaro SS produces 455bhp and 455lb ft of torque, which beats the old car’s 432 horses and 420lb ft.

Five other power plants are available in the new car, including a 275bhp 2-litre turbo four-cylinder and a 335bhp 3.6-litre V6. As well as producing more power, all engines offer better fuel economy thanks to the use of forced induction (in the case of the 2-litre), and cylinder deactivation. As such, the most efficient four-cylinder unit can achieve a claimed 36mpg combined while also accelerating the Camaro from 0-60mph in ‘under 6sec’. 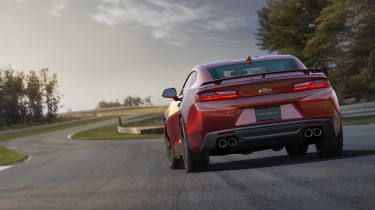 Also helping the Camaro better its fuel efficiency (and increase its performance) is lighter weight. More than 90kg has been shaved from the new car’s kerb weight, with the body shell contributing a substantial 60kg to that total. Exact numbers are yet to be confirmed, but in V8-spec, the old car weighed 1769kg, so the new V8 model should comfortably squeeze under the 1700kg mark.

While weight has been trimmed, structural rigidity has increased by 28 per cent, suggesting the new car should be nimbler than its predecessor. The case for this is strengthened with the Camaro’s use of aluminium front suspension links and steel rear links with lightening holes. In total, the new five-link rear suspension is 12kg lighter than the old car’s independent setup. 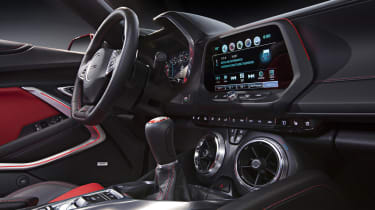 All models will be offered with Brembo brakes, with the most potent SS featuring them as standard. The SS’ discs are 320mm and 315mm in diameter (front/rear) and feature four- and single-piston calipers. These will sit behind 20-inch aluminium wheels wrapped in Eagle F1 Asymmetric 3 run-flats. Lesser models get these tyres on 18-inch wheels as standard (the 20s are an option across the range).

Exterior design clearly represents evolution rather than revolution, building on the previous model’s mix of classic and modern lines. Things are rather different inside, with the launch car’s materials and almost futuristic dash lines moving things substantially on from the old car’s cabin. 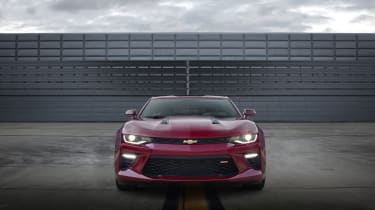 The new Camaro won’t make it to UK shores through official channels, but given that import taxes would push costs into the realms of more powerful and efficient European super-saloons, the Camaro would face an uphill battle anyway.

In its native US market, however, its muscle and affordable price (unconfirmed, but expected to start around the current car’s bargain $23,705) will undoubtedly make it more appealing. It’s therefore sure to be a contender for the vastly improved new Ford Mustang.