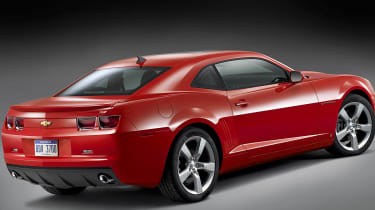 More muscle car news, as Chevrolet announces its reborn Camaro will make a European debut in production form at the 2008 Paris motor show from October 2.

Much like its Mustang and Challenger rivals, the styling has been rewound 40 years to produce an aggressive looking performance car. The looks go hand in hand with a suitably-large 6.2-litre V8 engine boasting 395bhp. And while the power may lag behind the Dodge we recently drove, the prospect of offical European sales for the Camaro - starting in 2010, a year after US sales - could put rivals' noses out of joint a little. It will join the Chevy stand alongside the Volt electric vehicle and a world premiere of the Cruze, a family saloon that'll hit the UK in spring 2009. Chevrolet call it 'four-door coupe-like' in style. In truth, it's an aggressively-styled budget car that should lift the brand's line up above its current collection ex-Daewoo models.