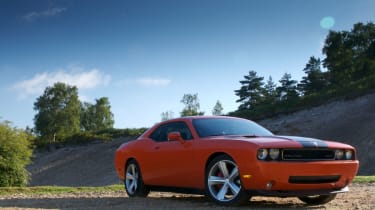 In my imagination I am Bo Duke, skidding the rump of my 501s across the bonnet of the General Lee. OK, so that car was a 1969 Dodge Charger and this is a reincarnation of the 1970 Dodge Challenger, but it’s painted orange and has a ‘hood’ the size of an ice rink, so I think I’m justified.

I’d better not try to imitate Bo’s driving style, though, as there are only two Challengers in the UK at the moment and the other one’s been laid low with an engine management fault. This one was down at the Goodwood Festival of Speed a couple of days previously, adding impact to the most distant corner of the supercar paddock, where it stole attention from the fearsome Mazda Furai and made the Bentleys parked nearby look a bit, well, small. At over five metres long and close on two metres wide, this probably shouldn’t be our sort of car at all, but we swarmed around it, taking in the sheer scale of the sheet metal, admiring the colossal chutzpah needed to put something like this into production.

That’s right, the Challenger is no longer a concept. Chrysler, Dodge’s parent company, is building 7000 of them – more if the demand is there, which it must surely be. Unfortunately it won’t be coming to the UK officially but, if you’re tempted, a few are starting to trickle in through the grey import route, selling for around £40,000 (a bit steep when it retails for $37,995 – around £19,500 – in the States).

This early car feels thoroughly well developed. It has good steering lock, few rattles and squeaks, decent interior trim and generous accommodation. That much you’d expect from a car that shares much of its architecture with Chrysler’s 300C saloon. The 6.1-litre 425bhp Hemi engine is a nice touch, too. It puts out exactly the same power as the 7-litre 1970 original, and since the Challenger isn’t quite as heavy as you might expect (at 1878kg it’s no flyweight, but it is lighter than a BMW M3 Convertible…), it does do speed quite well. 0-60mph takes a little over five seconds, 0-100-0 is dealt with in 17 – enough to trade blows with an Aston V8 Vantage.

It also sounds as good as you’d hope and, although the shifts are less than subtle due to the chasmic gaps between ratios, the five-speed auto responds quickly. Brembo has taken care of the braking, equipping the Challenger with 360mm front discs behind its 20in wheels, and they do the job admirably. In fact there’s much to like about this car. It handles and rides better than it has any right to – the suspension is surprisingly well controlled and although the tyres struggle to dig into the tarmac, the chassis does most of the right things. Pity it’s not that reassuring round bends due to the complete absence of any steering feel.

But that’s not what this car is about. It’s about looking effortlessly cool in as nonchalant a manner as possible. It’s the sort of car you want to drive with one arm stretched out along a bench seat, the other resting atop the wheel. Just like they did in Hazzard County.