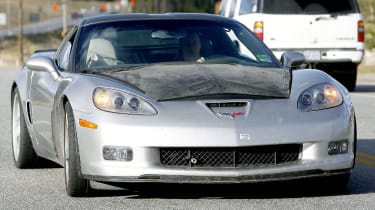 These are likely the best and maybe the last pictures of what is commonly referred to as the Blue Devil Corvette, before it makes its official debut in January at the NAIAS in Detroit. |

For the last two years the media has called the supercharged Corvette everything from Blue Devil to SS, Z07 and Sting Ray, but Motor Trend recently stated that it will officially be called the ZR-1. At a quick glance this might look like an ‘ordinary’ Z06 with a vinyl-clad hood, but this Corvette is anything but ordinary!

Power for this beast will come from GM's new LS9 motor. The LS9 is a 6.2-litre, supercharged, small-block V8. This powerplant will put out anywhere between 600-650 horsepower. The supercharged V8 will utilize an integrated intake manifold intercooler and is expected to run a 0-60 in under 3.5 seconds. The 6.2-litre V8 will be built at GM's Performance Center in Wixom, Michigan.

The super-hot ZR-1 will weigh even less than the Z06, utilizing more carbonfibre in the body (notice A- and B-pillars, and the roof), as well as polycarbonate 'window' in the hood.

With speeds reaching, and possibily exceeding, 200mph, a wider, taller, lip spoiler has been added to the back of this Corvette. The spoiler now runs almost the entire length of the car to increase downforce and keep those massive tyres glued to the road.

In the past few months, rumours have circulated that GM would be switching from Goodyear to Michelin tyres for this Super 'Vette. We can now confirm this as this test car is sporting Michelin Pilot Sport ZP tyres. The rear tyres appear to be a whopping 335/25Z/20 size!

Production of the supercharged Corvette will start in July of 2008 (as a 2009 model).