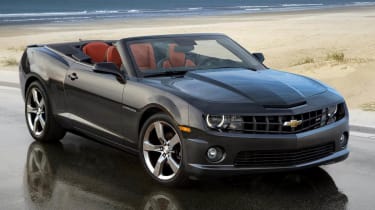 The 2011 Chevrolet Camaro Convertible will be seen publicly for the first time at the 2010 Los Angeles Auto Show this week.  The soft-top variant of the Camaro, which has been delayed due to the financial problems of Chevrolet’s parent firm, GM, will go on sale in the USA in February 2011 with an estimated starting price of 30,000 US dollars (c£19,000). It will reach European markets, including the UK, later in the year.

Fitted with a standard power-folding top that retracts in around 20sec, the soft-top four-seater will be offered with the same pair of engines as the coupe – a 308bhp/278lb ft 3.6-litre V6 or the 420bhp/420lb ft 6.2-litre V8. A six-speed manual transmission will be standard, with a six-speed automatic an option.

As with the coupe, only the V8 will be available in the UK. Chevrolet hasn't released performance figures just yet, but expect a 155mph top speed and a 0-60mph time of around five seconds. UK prices for the V8 version are likely to be north of £30,000.

Chevrolet says it has worked hard with the new drop-top so that it matches the coupe as closely as possible in terms of ride quality, handling and overall performance – insisting the set-up has not been softened in any way.  Instead the focus has been on bolstering the structure, with four strategic reinforcements to enhance the body's strength, with GM claiming that the Camaro Convertible boasts greater torsional stiffness than BMW’s 3-Series drop-top.  Demand for the car is likely to be strong – last month the limited edition 2011 ‘Neiman Marcus Edition’ Camaro Convertible sold out in just three minutes, despite costing more than 75,000 US dollars (c£48,000). You can read about that here.