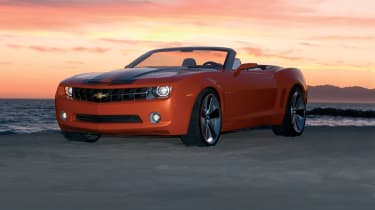 Mustang, Corvette, Camaro. All US sports car icons; all enjoying something of a renaissance at the moment. The first two are already with us, and from 2009 the Camaro will join them.

When we drove the coupe version last year the Camaro’s transition from dashing concept to production reality had yet to be confirmed. Since then a slow but steady trickle of information has leaked out. The coupe will be launched in 2009 and joined later that year by the convertible driven here. There’ll be a large model-range, so Americans can buy poverty-pack versions from around £10,000 (damn them). It’ll come to the UK, too, and it’ll be available in right-hand-drive form.

Of course, no one will fess up to that last point, but the Camaro uses essentially the same platform as the Holden Commodore (think Vauxhall VXR8) and Australians still have the steering wheel on the right – figuratively and literally – side.

Like the coupe, the convertible looks just like a modern Camaro should. The lights are neatly recessed and there’s a narrow air intake at the bonnet’s leading edge. Side-on, meaty front wheelarches taper in before flaring out again and kicking up over the rear wheels. The cues from the 1969 model are evident until you get to the rear view. Thankfully, the Chevy designers haven’t slavishly stuck to the look of that first-generation car, ignoring the boring rectangular lights of that model in favour of deep-set curved ones that owe more to the second generation car.

Sadly we didn’t get to see the car with the roof up. For the duration of our test, it remained shut beneath the solid tonneau. But designer Brian Smith assures us that when raised it does a pretty good job of replicating the coupe’s shape, although the glass window at the back will be smaller and less raked.

The Camaro will have a decent choice of six and eight-cylinder engines; beneath the bonnet of this model lurks the 6-litre V8 LS2. Smith says they spent considerable time ensuring the sound hit all the right notes and it hasn’t been wasted. The motor bursts into life with a thunderous rumble – deep and dark and throatier than the Corvette. The clutch is surprisingly light; the throw of the billet aluminium gear lever is incredibly long but feels positive. Since the car has been suffering cooling traumas, we’re told to keep the speed to at least 25mph to get some air through the engine.

You could happily hit that in first gear, but with Smith sitting alongside to ensure no harm befalls his baby, that isn’t going to happen. I change up to second and we surge forward again. The engine sound reverberates around us, throbbing, thrilling and addictive. This is most definitely a feel-good car even at this early stage of its life.

But it’s also a concept, albeit a working one, and you’re constantly reminded of that. Narrow mirrors offer a tiny, distorted view of what’s going on behind and the instruments don’t work so I have to judge speed by the rate of wind flowing over my head. But still the driver’s seat is a great place to be. The dash has been hand-stitched in leather; the dials look great – deep and circular like the afterburners on a jet fighter. Unfortunately, the concept car’s glassfibre body is overweight and the steering feels leaden, not helped by near rock-solid suspension.

We’ll have to wait to see if the Camaro has the dynamics to challenge the Audi TT, Nissan 350Z and Porsche Cayman/Boxster. At least it’ll look something like a machine bearing the Camaro moniker should.