Concept car looks, a starring role in two hit movies, and a 420bhp V8. What's not to like about the new Chevrolet Camaro? 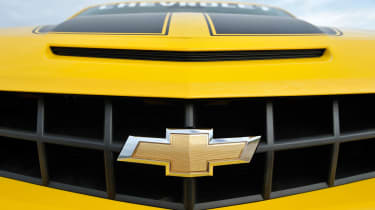 Welcome to the first British road test of Bumblebee, and the first ever evo test of a robot in disguise (anyone who has sat through either of Michael Bay’s Transformers movies will understand. Anyone who hasn’t probably thinks I’m due for my pills about now).

We first saw the reinvented Camaro as a concept back in 2006 when the retro renaissance was in full swing and the fifth-generation Ford Mustang had just gone on sale. Now, four years later, the Camaro is finally going to reach British shores, albeit with the steering wheel still on the wrong side. The even better news is that Chevrolet hopes to pitch the price at the same level as Nissan’s 370Z. A 420bhp, V8-engined film star for around £30,000 brings the words ‘bang’ and ‘buck’ to mind (and not with reference to a road traffic accident with a deer).

We’ve managed to sneak the Camaro out of the Goodwood Festival of Speed for the evening. It certainly stands out as it negotiates the meandering downland roads and leafy Sussex lanes. Mostly it still looks very much like that first concept car, all wide and aggressively angular. However, look at it from dead head-on or sit behind one in a traffic jam and it somehow looks weirdly narrow, which spoils the butch image just a little.

I was slightly fearful that when I opened the door of the Camaro I might be faced with a parts-bin interior with lots of hard black plastic and an overriding feeling that the designer went home after he sketched the steering wheel. Not so. The round dials set into rectangular binnacles are a little challenging, but the plastics on the radio and climate controls are a pleasant silver and there’s no sense that they’ve been lifted straight from the dash of a pick-up. In fact the auxiliary controls for the radio are almost too small, lost in the broad spokes of the sharply dished wheel.

The underpinnings for the all-American hero are actually from the Aussie branch of GM, which means the Camaro shares its platform and its 6.2-litre LS3 V8 with Vauxhall’s VXR8. This is essentially very good news. We’re big fans of the bruising super-saloon, so a two-door coupe version should be great.

The first few miles are certainly promising as we slowly negotiate campers leaving the Festival, their ears ringing and noses full of a fug of deliciously oily fumes. The pedals are well-spaced, and each has a pleasingly instant response – the throttle particularly so. The gearbox is typically meaty and slow, but there’s a slickness to the action and the way it engages each gear that’s satisfying. The steering is also direct enough to thread the big bonnet reassuringly accurately between the hedgerows, although it’s completely without feel – apart from the edge of that sharply dished rim digging gently into your palms.

All 420bhp is certainly there, but the V8 needs to be wound up with more revs than you might imagine to extract it, and because the gearing is incredibly long you find you’re grappling with the ’box more than you’d expect.

But the Camaro isn’t just about hammering along and looking mean: it has a limited-slip diff between the rear wheels and (get this, Mustang) proper independent rear suspension. Unfortunately, it’s as if the engineers assumed the mere presence of a multi-link set-up would be enough and didn’t bother to tune it.

There’s a good deal of wallow as you pick up the pace, relatively small bumps creating big, vague, vertical movements in corners. Instead of the car shrinking around you, the front-end accuracy disappears after you turn in, and you’re left hanging on to a large car travelling quite quickly in a worryingly approximate direction. Small adjustments are not an option. If you wanted to slide the Camaro, you’d need to pick a corner with lots of room and be prepared for a fairly untidy gathering process that might go on for some time…