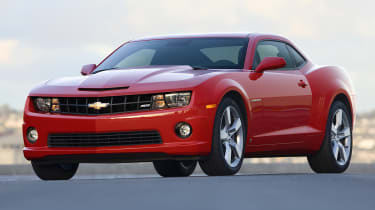 It might be backs-to-the-wall time for General Motors, but what better way to meet your fate than with revolvers blazing in the form of a good ol’ American muscle car? Butch Cassidy, eat your heart out.

Although the new Camaro has its roots firmly in American automotive culture and was designed in the US of A too, it was engineered and developed in Australia using GM’s global rear-drive platform, and it should be in UK showrooms by the end of next year – albeit initially in left-hand drive only. The design work for putting the steering wheel on the other side has been completed, but the tooling still needs to be paid for, and suggesting that in Detroit right now would be about as welcome as a fart at a funeral.

You’ll know the Camaro’s oily bits from the Vauxhall VXR8. It’s on the same platform, and in range-topping SS form it also uses the same 6.2-litre ‘LS3’ V8 from the current Corvette, here complete with 426bhp, 420lb ft of torque and a laughably relaxed maintenance schedule. Thanks to those underpinnings there’s also the most un-muscle-car-like sophistication of independent rear suspension, a snippet of info GM hasn’t exactly been shy in advertising. There’s even talk of testing at the Nürburgring – not exactly the domain of the big-block lump-hammers of yore.

Rather than plunder the Camaro back catalogue mercilessly, GM has mixed some traditional design cues for the exterior – filched in particular from the 1969 model – and reinterpreted them with crisp edges, supposedly influenced by the F22 fighter jet. Inside, first impressions fall straight to type: it’s dark, with a huge, stylised (and horrible to hold) steering wheel and a letterbox view down the macho bonnet.

Start it up and the Camaro makes all the right V8 noises. There’s even an emotive crackle from the tailpipes on the overrun, cleverly engineered by careful design of the centre exhaust box and ECU programming by someone with a sense of humour. Chevrolet claims a 0-62mph sprint of 4.7 seconds, but while there’s no doubting it goes when you properly stoke it, it just doesn’t feel quite that fast. To blame is the combination of the car’s weight (a not inconsiderable 1746kg), yawningly long gearing and an engine that does its best work with a good few revs on the dial. You find yourself having to stir the hefty gearlever frequently – there just isn’t that any-revs, any-time surge you’d expect.

Smooth roads and few corners characterised the roads at the Middle Eastern launch, but there’s enough evidence to suggest the Camaro may be a little disappointing. The suspension is surprisingly soft, allowing a fair degree of initial body roll, something that seems slightly at odds with the strong outright grip of the generous rubber. This softness extends to plenty of vertical movement in the control of the body, the car pitching and squirming through long, fast curves. Factor in light, rather vague steering and it’s all a little bit unsatisfying. Especially as, sadly, it’s not prone to the sort of hooliganism that melts the rear covers through every roundabout, either.

In spite of this, the Camaro is appealing in small doses. Whether that can be translated into an experience you might want to put your money into is another matter. Right-hand drive availability and pricing will be key, that’s for certain, but a little rethink on certain elements under the skin wouldn’t go amiss either.