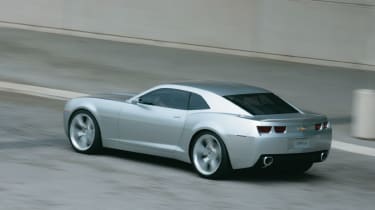 So, is Bubba going to have a new playmate? Ford is leading the great American muscle-car reinvention with the Mustang, but post-Detroit show, where GM and Chrysler showed their counter-attack proposals, the talk was of Camaros and Challengers and whether they will ever make production. And then it went quiet.

But now here I am at General Motors’ Milford Proving Ground, just outside Detroit, and here is the Camaro concept car, silver like it was at Detroit, and looking very real indeed.

Officially, GM is still studying the business case for a production version, but product chief Bob Lutz has virtually gone on record to say that it will happen. Thanks to the heady cocktail of hydrocarbons that seems to travel through his arteries, Maximum Bob is famously indiscreet about such things, but the lack of a subsequent damage-limitation exercise (not to mention this invite) would suggest that the Camaro is a goer.

Despite consisting mainly of hardened hacks, the crowds at Detroit cheered when the Camaro concept followed a trio of ’69 Z28s along the Chevrolet stand’s carwalk. It looked terrific.

It has just as much presence now, possibly more as it stands in the workshop unbattered by motor-show spotlights. Of course, it’s clearly Camaro-shaped, as in the original version and not the sad, emaciated creature that bowed out in 2002, but it’s hunkier, chunkier, exaggerated. The rear wings flare abruptly out from the doors’ rear edges to cover enormous 22in wheels shod with specially made 305/30 R22 Goodyear tyres. The windscreen’s header rail is low and brooding.

I open the bonnet to reveal the 6-litre, 400bhp V8. It’s the latest, lightest, evolution of the Chevrolet small-block family, which might share nothing more than the bore centres and the basic pushrod architecture with the ’55 original but is still a fine piece of Camaro continuity.

It fires up. Loud, deep, and unlikely to pass most drive-by noise regulations. The sound erupts from a fat pair of machined aluminium tailpipes, angry and impatient. Would I like to drive the Camaro out of the workshop now? You bet I would.

I pull the driver’s door open. It’s a substantial piece of glassfibre, like the rest of this concept car’s bodywork, but the panel gaps and the crispness of the edges are better than pretty much any production glassfibre or other composite car I’ve ever seen (including Chevrolet’s own Corvette). The driver’s seat is high, so high that the steering wheel is in my lap and the header rail is like the peak of a giant cap. ‘The idea is to make the seat look like it’s floating,’ says Gretchen Darbyshire, who has the fine job of organising concept-car construction at GM’s Advanced Design Studio.

Into gear and off we rumble, Gretchen in the passenger seat. She still hasn’t driven her creation: ‘It happened so quickly, finishing the car for Detroit, and it’s been out at shows ever since, so I haven’t had a chance.’

Ahead of me are instruments sunk deep in 1960s nacelles, all around are shiny machined and polished aluminium details. The main dials work – by no means a given in a concept car – but the rectangular gauges ahead of the gear lever, with their golden yellow faces, do not. There’s golden yellow across the dashboard and in the door trims, too; it looks like anodised aluminium but is actually acrylic plastic. Behind the steering wheel are two stalks flattened like blades, another 1960s touch.

An exploratory prod on the accelerator triggers an encouraging crackle and a burst of thrust. This Camaro is rather heavier than a steel-bodied production one would be, not least because the glassfibre is so thick, but it feels pretty rapid. Up to a point, anyway – it’s nominally limited to 60km/h, or 37mph, because it’s a concept and the engineers are worried that fragile pieces, such as those blade-like door mirrors, might fall off. But judging by the eruption of sound and movement in second gear, we’ve just broken that barrier significantly.

‘You’re enjoying driving this car,’ Gretchen observes. ‘That’s good to see, because that was the idea.’ She noticed my smile when the V8’s 400bhp made their bid for freedom. It sounded fantastic. ‘We worked hard on that,’ she says, ‘trying lots of different mufflers.’

Here’s a bend. The Camaro steers tidily, grips gamely on those huge tyres (the fronts are 275/30 R21, by the way, and all the wheels are machined from solid billets of aluminium). It feels lithe, if on the firm side, but the fine-tuning is hardly relevant at this stage. More important is this: if, or when, the Camaro gets the go-ahead, what will lie beneath?

The concept car uses Cadillac STS rear suspension and the front end from a ‘pre-production platform’. This is almost certainly GM’s imminent global rear-wheel-drive platform, developed by Holden in Australia and favourite for the Camaro. It’s dimly descended from the Monaro, but with input from GM engineers worldwide. Crucially, it has proper independent rear suspension. That will be one-up on the live-axle Mustang if the Camaro becomes a production project at the end of the year. Which it will. Won’t it?