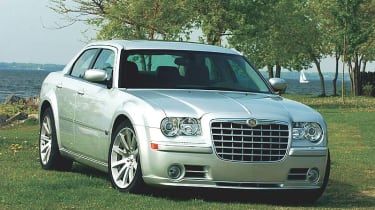 Chrysler's 300C finally arrives here in October in RHD, but meanwhile there's a hotter-rod version hard on its heels. This new SRT-8 has a hefty 425bhp and were it not for a never-completely-extinguishable ESP system, the pent-up horsepower would be spilling all over the road. Power trumps grip, easy, muscle-car power with a machine-gun backbeat matched to the sort of torque that twists the whole car on its suspension when you blip the throttle. The 300C was pretty good to begin with, a square-cut, bluff-nosed hunk of future-retro with deep flanks, epic wheelarches and shallow side-windows like a Rover P5 Coupe or some Californian customiser's chop-top. The 300C blends a US flavour of V8 - it's the reincarnation of Chrysler's pushrod Hemi with valvegear like a knitting factory - with some Mercedes-derived underpinnings that give it Euro-flavoured ride and handling. Already the Hemi version gives you 340bhp from its 5.7 litres, but now the SRT-8 (signifying Street and Racing Technology) is bored out to 6.1 litres to release that 425bhp. This is a major engine makeover, all the way through to a strengthened block. The compression ratio is now 10.3:1, even though the engine is calibrated for 91-octane US fuel, so on better Euro-petrol there's the potential for even more ponies. Stiffer springs, dampers and bushes tauten the suspension, on which the body sits half an inch lower. Four-piston Brembo callipers clamp bigger brake discs, and 45-profile tyres are mounted on 20in wheels. Deeper valances adorn the nose and tail, fake wood gives way to textured metal inside, and the seats have deep bolsters and suede inserts. Does it all work? It does. Think of it as a Cadillac CTS-V with more believable styling, or as the Mercedes E55 AMG's stock-car-racing cousin. The 300 range is built in Canada, not Detroit, and Canada is where we try out the firepower, firstly on the auto-route out of Montreal, where Frenchness abounds. Winters are heavy here, so the road surfaces have cracks and tectonic shifts. First surprise: it may be firm, but the ride is remarkably unruffled by the distress beneath. There's a distant thud and that's that; no aftershock, no rattles, no human wincing. Small-bump suppleness is married to taut control of body movements, making the SRT-8 nimble and quick to respond; it should suit UK roads just fine. Second surprise: a rock-steady 700rpm idle grows to civilised low-speed manners despite the power potential. Then I put my right foot down and blat! We've snapped right round to 6000rpm with a muted but savage battery of V8 firing pulses. This is well up with the European supersaloons for pace: 60mph in the low-fives according to Chrysler, max speed over the magic 155mph. And it's all so easy. Just plant foot and go. I'm liking the five-speed auto, too. It shifts definitely but never jerkily, and you can smooth a manual downshift with a throttle-blip in a way you often can't with a torque-converter auto. Now we're off the autoroute and into country roads. With ESP switched out there's still some background watchfulness, but on a tight, low-speed turn one squirt of the accelerator flings the tail out with laughable ease. Even with ESP on there's a degree of tail freedom, and the tight limited-slip diff regularly reminds you of its presence. It's good, high-power, rear-drive fun and rather better resolved than a Vauxhall Monaro (quicker steering, much more composed ride). It's likely to be a bit of a bargain, too. I really hope it catches on here.