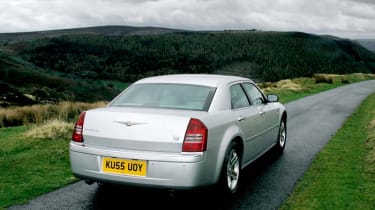 You know how sometimes you just can't help liking something, even if, deep down, you know it's actually a bit wobbly. Think most old James Bond films. Boris Johnson. Blockbuster by The Sweet. The Chrysler 300C's a bit like that. Dynamically it's a division below the big BMWs and Jags; it's not madly quick; it doesn't ride particularly well, and it'll probably lose money like a drunk on a cattle-grid. And yet everyone here who drove the new right-hand-drive version of the top-of-the-range 5.7 'Hemi' just loved it. Much of the appeal is down to the way it looks, of course: Fifties gangster with a gothic twist and a dash of Harold Wilson's prime-ministerial Rover P5B. Best in black, it has undeniable presence. It feels huge and imposing from behind the wheel too - the high, flat top of the dash is almost a continuation of the bonnet, exaggerating the feeling that you're guiding something large and powerful. Our test car came with Brabus 'Startech' Alcantara trim (an £873 option) which lifts the interior no end, and there are silver-faced instruments that glow pale-green at night, so although it feels a bit cheaper than the European equivalent, it still feels special (and it's pretty good value too). The only obvious omission from the spec-sheet are parking sensors, which would be handy when inching such an acreage of metal into our quaint little English parking bays. The 5.7-litre V8 sounds a bit tame when you fire it up ('Hemi' is purely a marketing label these days; this engine is no relation to the classic Mopar muscle-cars of the Sixties) and performance is brisk rather than genuinely quick, though it gets a second wind - and finds its voice - at around 4000rpm. You have to force the five-speed auto to kick down to get a real surge of overtaking thrust, or nudge the shifter across the gate and use the Tiptronic-style manual override. For the full supersaloon effect we'll have to wait for the 425bhp SRT-8 to arrive in the Spring, but there's enough grunt to get the rear sliding on roundabouts and out of junctions with the ESP switched off. The steering feels nicely alert, too, though the chassis never quite masks the 300C's bulk. The ride feels initially good, though much of that's down to the deep sidewalls of the 225/60 R18 Pirelli P7s; at speed over even moderately uneven surfaces it lacks the damping control and general poise of the best Europeans. Not great, then, but immensely likeable. And Boris for PM.