New DS brand previews its future, and evo gets a brief taster 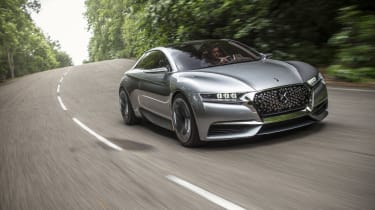 A large drape of material sweeps down from the passenger side, appearing to twist as it shrouds the centre console, and continues between the seats as a padded armrest. On this car, the finish is diamond-patterned leather, interlaced with Swarovski crystals. Should anything similar hit the streets, Fressard says the elements can be swapped in their entirety, completely changing the cabin ambience.

The wheel is a leather-wrapped oblong – Quartic, as Austin might have called it in the 1970s – with metallic inserts at the top and bottom. Through it there’s a holographic display screen for the navigation system. Above is a heads-up display showing all the usual information – speed, revs, coolant temperature and more.

The sculpted seats aren’t as comfortable as they look – another hang-up of the form-over-function nature of a rolling concept. The wheel though is satisfying to hold, and the driving position is low-slung. The roofline feels low, but the cabin is airy thanks to an expansive windscreen and light filtering through opaque scales in the roof. 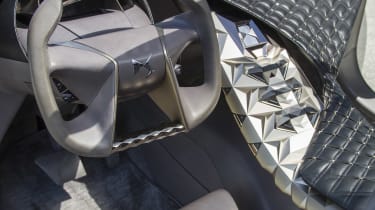 Under the bonnet is the 1.6-litre THP petrol engine from the Peugeot RCZ-R. The transmission is an automated-manual. Due to the vagaries of concept car production, it’s only part-functional – via a set of disembodied paddles from the PSA parts bin. These sat in my lap during the drive.

On the move, the Divine is anything but divine. It’s noisy, gets hot quickly, is remarkably stiffly-sprung, and feels like it’s about to fall apart over every bump. There’s no servo for the brakes, and the cobbled-together transmission wasn’t enjoying life behind the photography tracking car, filling the cabin with the smell of burning clutch. It was happier at the 30mph maximum – but in its concept guise, you’d not want to travel any faster.

But it’s impossible – and unfair – to assess the car in its current state. Greatly more important is that the DS Divine feels special on the move. The interior ambience is something the brand will aim for with future production models. Those cars will compete not against Citroen’s traditional rivals, but on a higher plane. A DS needs to feel special, and customers need to feel like they’re not driving a tarted-up hatchback from a budget brand.

The current DS range already succeeds here to a degree, particularly the oft-overlooked DS 5. But future DS cars – there will be six new vehicles worldwide by 2018 – need to justify DS’s haute couture aspirations. In design, in technology, and in the way the cars drive.