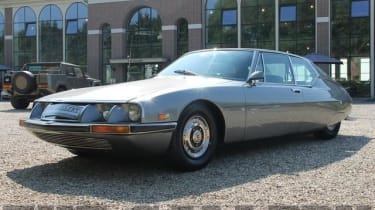 Citroen of the 1970s was very different to Citroen of 2015. Not quite as financially solvent perhaps, but also pivotal in the company’s history.

The adjective ‘quirky’ is criminally over-used to describe Citroen’s 1950s-1980s output, but there are simply few better words to describe the spectacular diversity available at your local showroom.

The 2CV was still very much present, joined by the marginally less impoverished Dyane and the aesthetically bewildering Ami. The Mehari was still around, too – complete with corrugated bodywork – and the aircooled, flat-four GS had just made its debut in 1970.

You could still buy the DS too, which was replaced in 1974 by the CX. Less visually stimulating than its predecessor, it nevertheless retained the famous hydropneumatic suspension and gave the decade one of its craziest (and most spacious) interior designs.

Yet Citroen’s most desirable product of the 1970s was the SM. A collaboration between Citroen and Maserati (a recent purchase for the French firm) the SM took the form of a luxury, front-wheel drive GT. It carried a 2.7-litre V6, later expanded to 3-litres. The former was enough to achieve a top speed of 140mph.

The Robert Opron-design was praised in Europe but also proved popular in the US, where Motor Trend named it Car of the Year in 1972. 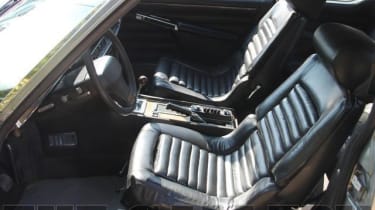 America is where this example at The Gallery in the Netherlands hails from (via Classic and Performance Car).  The styling is the giveaway – contemporary US regulations made the SM’s previously glass-shrouded headlights illegal, requiring four, round, unfaired units in their place.

It takes away one of Opron’s most distinctive flourishes on the car, but providing you could find suitable parts (now a rarity) it wouldn’t be impossible converting the front end to its original, prettier form.

This example has covered 40,920 miles and recent work has left it as fresh as ever. The champagne bodywork finish is second only to metallic brown as far as perfect colour schemes go for an SM, and the interior with its delicate manual gearshift lever looks as sumptuous as ever.

At £17,714, it also looks conspicuously good value for such a highly-regarded car. Citroen’s reputation for complexity and unreliability no doubt contributes to the low prices SMs command, but there’s a wealth of experts out there trained in the ways of Citroen’s mysterious green suspension orbs.

Of course, it won’t be quite as brisk as the 266bhp, Peugeot RCZ-R engined DS Divine concept, but DS has a lot of work to do to make its future production cars as desirable as the SM.

> Find Citroen SMs for sale on Classic and Performance Car