Surf’s up as Citroen Cactus M Concept sweeps into Frankfurt 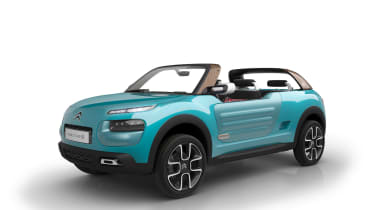 Between the rows of clinical white hatchbacks and sober-suited, silver-painted saloons at the Frankfurt motor show, Citroen will be taking things much less seriously.

The Citroen Cactus M Concept is the firm’s modern-day interpretation of the Citroen Mehari – a lightweight, pared-down beach car with 2CV running gear.

As the name suggests, the latest car is based on Citroen’s most unorthodox modern product, the C4 Cactus crossover. That similarity is readily apparent in the M Concept’s front and rear styling, but between the axles and above the window line, things are rather different.

The concept sheds the Cactus’s roof, doors, windows and tailgate glass. In their place is an unbroken view of the sky and, towards the rear of the car, a significant arch spans the bodywork. This, like the steeper-raked windscreen surround, is covered in a wooden veneer, which echoes the design of Citroen’s specially-commissioned surf board.

Access to the open-air interior is via a pair of elongated doors. These not only allow unhindered access to the rear, but are also built from the same thermoformed plastic as the protective airbumps found on the regular Cactus. They’re designed to resist – in Citroen’s words – knocks, scratches, salt water and sand. 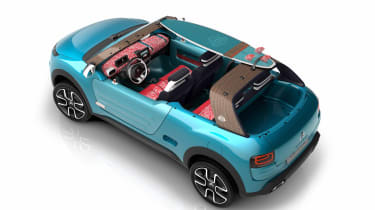 The material is also applied to the bumpers, further protecting the Hawaii blue paintwork. The overall design is supposed to resemble the hull of a boat, and while the Cactus M Concept won’t quite float, the cabin is water- and salt-resistant.

Perforated foot wells allow water to simply filter through unhindered, and the neoprene-covered cabin is designed to be hosed out, much like the original Range Rover. The colour scheme is designed to evoke wet suits, and the Hawaiian theme is continued with the floral patterns on the dashboard and seats.

Should the heavens open, the Cactus M Concept does provide its passengers with a roof. An air compressor inflates three tubes, over which a roof can be stretched. The car can also be turned into a bivouac of sorts, using the inflating roof as a tent that can fold out at the rear of the car.

The drivetrain is rather more conventional than the styling and features. Under the bonnet is Citroen’s ‘PureTech’ petrol engine. Its 1199cc and three cylinders produce 108bhp and 151lb ft of torque, and Citroen quotes the same fuel economy figures as the hard-topped Cactus, at 60.1mpg and 110g/km of CO2.

We’d expect therefore that performance is also similar, and the standard car can reach 62mph in 9.3 seconds with a manual transmission.

While there’s no guarantee of the model going into production, the concept is evidence that Citroen is considering the potential of the Cactus. The concept will appear at the Frankfurt motor show, which opens to press on September 15.

Those eccentrics at Citroën are giving the C4 another go, this time with a swoopy silhouette
455bhp Alpina B3 Touring priced from £67,950

Following its reveal at 2019's Frankfurt motor show, Alpina has unveiled pricing for its take on the BMW 340i Touring
Alpine A110 Sports X takes on winter, and wins