Snapped recenty undergoing first testing in its home country, these are early spy-shots of the all-new Citroen C3, due for launch in 2009 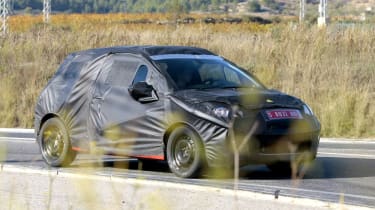 By the time of its appearance in summer next year, the current model will be over eight years old – quite a long production time for a modern passenger car. Rumours suggest the new car will become the successor not only of the current C3 but also of the smaller C2 which hasn’t proven to be a big success. Instead, the French carmaker will concentrate on developing the C1 and C3 as well as the brand-new C3 Picasso – and will drop the C2.

Judging from the spy-pictures, the car will keep its 2CV-derived round styling, combined, of course, with more modern elements such as headlights, tail lamps, grille and other air-intakes. Like today, the new Citroen C3 will be available as a five-door hatchback and might as well be offered in the X-TR semi-offroad variant. It’s very likely that a new C3 Pluriel, the multi-functional cabrio, will be offered later, too.

Under the bonnet we’ll see another range of petrol-engines with outputs between 60 and 110 hp. More famous, however, are the PSA-group’s HDi diesel engines delivering between 70 and 110 hp.