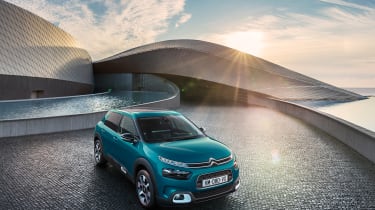 The C4 Cactus has been a given a mid-life facelift, but in odds with manufacturers scrambling to turn everything this side of a convertible into an SUV, Citroen has instead decided to tone down the original car’s SUV pretence in favour of some more mainstream styling.

The biggest visual difference you’ll note is the loss of the original car’s distinctive Airbumps. Love them or loathe them, they certainly gave the C4 Cactus a distinctive look to top off the Cactus’ already funky styling. They have not been scrapped completely though, with Citroen’s designers now integrating them into the lower secondary surfaces, much like on the smaller C3.

The front and rear aspects have also been subtly changed, with the front end now employing some more heavily tapered lighting elements and larger low-mounted fog lights. At the rear, Citroen has spread the rear lights onto the boot-lid in an attempt at giving the car a wider stance, also featuring new LED graphics. 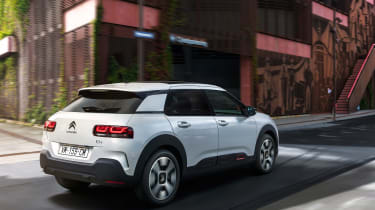 Inside Citroen has kept things largely static, maintaining the previous car’s pared back, minimalist feel. Still dominated by a central infotainment screen, the low dash and soft chairs still look bang up to date. The infotainment system has received a slightly upgraded software pack and the ability to support Apple CarPlay and Android Auto too.

Drivetrains have mostly remained the same as before, focusing on three-cylinder petrol and four-cylinder diesel options. Two new flagship engines will be available, including a 128bhp petrol and 118bhp diesel later in Autumn 2018, although Citroen is still unlikely to put anything more potent under the bonnet.

Some new technology the C4 Cactus will offer is the first European application of Citroen’s Progressive Hydraulic Cushion suspension set up. The system replaces traditional bump-stops with two-stage hydraulically controlled units, better dissipating rapid inputs of energy such as when crashing into a pothole. Although the new Cactus is unlikely to be a shoe-in for the next eCoty, Citroen says it will improve overall ride quality without affecting the C4’s road-holding.

Final UK prices and specifications have yet to be released, although we should see the car on UK roads early next year.