Alfa Romeo 4C Coupe and Spider review - it may look like a miniature supercar, but does it drive like one? - Engine and gearbox

Controversially, the Alfa makes do with a turbocharged in-line 4 cylinder. Rather than spend their money on an exotic engine, Alfa opted for a more ordinary powertrain then spent the remaining money on a fancy carbon fibre chassis. Immediately, after starting the engine, it certainly seems like this may have been a mistake. Rather than a pleasant sound, the exhaust emits a droning noise that’s just slightly too loud. 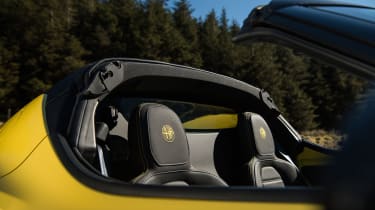 The noise from the exhaust remains droney and antisocial, but as the revs rise, there’s a whooshing from the turbocharger and then chirps from the wastgates on a closed throttle. It might not be the most sophisticated engine, but there is an old-school charm to it’s overtly turbocharged nature.

With every gearshift, there’s a flatulent exclamation from the exhaust. Thankfully though, the gearbox is responsive and the up and down shifts happen relatively quickly. Each change isn’t as clear and defined as the best double-clutch transmissions, but it’s never frustrating or obtrusive. The ratios are nicely judged too, each gear keeps the turbo on-boost nicely.

With the ‘box left in it’s auto mode, it seems to always choose one ratio too low. However, it might only seem this way because the tuneless engine begins to grate as the revs increase, and you seek any way of reducing the noise.