Alfa Romeo 4C Coupe and Spider review - it may look like a miniature supercar, but does it drive like one? - Prices and rivals

Since the demise of the naturally aspirated flat six from the Boxster and Cayman, the Porsches can no longer trump the 4C in terms of powertrains so considerably. We have only driven Porsche’s new turbocharged four cylinder in the 718 Boxster, and although it doesn’t match the old engine it is far nicer than the Alfa’s very industrial feeling motor. The 718 is also a far more resolved, fun and satisfying car to drive than the 4C and is significantly cheaper. The 718 Cayman S is £48,834, while the Boxster S is £50,695.

In terms of price, the 4C Spider is on a par with the Porsche Boxster Spyder. With a more driver-focused chassis, a back to basics interior and roof, it’s more like the hardcore Alfa. But, with the atmospheric flat six engine from a Carrera and an intuitive and natural driving experience it destroys the 4C. 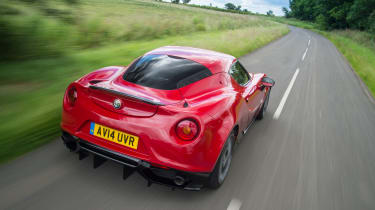 If the Porsche’s are too soft for your tastes, then the Lotus Exige should placate you. Like the Alfa they do without assisted steering, but instead of ruining the way they drive it only enhances it. The Exige’s aluminum chassis might not be as exotic as the Alfa’s but it still keeps the Lotus’s weight down to 1166kg; considering its supercharged V6 that’s an impressive figure. The Exige isn’t just an extremely talented road car though, it’s well within its abilities on a track too. An Exige S Coupe is £55,450, so a bit more than the hard-top 4C, but the Roadster is cheaper than the Spider at £56,450.

Often considerably more expensive, less capable and with uninspiring engine, the 4C doesn’t stack up very well next to it’s rivals; that’s the price you pay for a carbon fibre chassis.