Miura, Stratos and more at Marcello Gandini exhibition in Turin 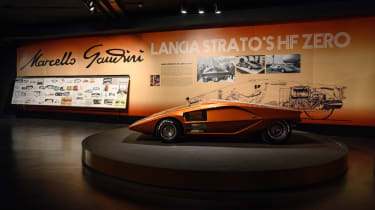 The day of the great car designer maestro seems largely behind us, but a new exhibition in Turin has opened up to celebrate one of the most signficant designers of all time, Marcello Gandini.

While design is largely a collaborative effort, it’s also long been steered by design directors who shape the general appearance of a brand’s range - for better or for worse, and few single designers have such a distinctive sleight of hand as did Gandini.

He is from a different age, where shapes across the automotive spectrum could be traced back to individuals, whether they be supercars or city cars. The exhibition at Museo Nazionale dell’Automobile in Turin follows other key exhibitions celebrating Giorgetto Giugiaro and Leonardo Fioravanti, and is a great example of Gandini’s range of ability.

Exhibits include incredible sports cars such as the Lancia Stratos (in both Alitalia rally and Stradale forms) and Lamborghini’s Miura and Countach, superminis like the Renault 5 “supercinq” and Innocenti Mini, and concepts including the wedgy Alfa Romeo Carabo (which introduced the idea of scissor doors) and the Bertone Volvo Tundra, which was later sold to Citroen where it became the BX – one of the first cars to be designed using CAD software. 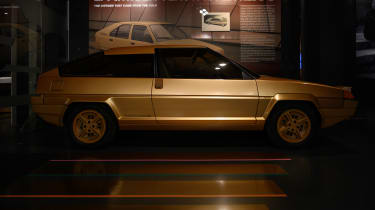 While Gandini’s early cars feature beautiful curves, it’s arguably his later, more angular and architectural designs for which he’s best known, and several are among the most significant cars of their respective periods.

As well as the cars on display, the exhibition also gives space to Gandini’s story, original documents, objects and film clips, along with details of numerous unfinished or extracurricular projects, not just limited to cars but also motorcycles, trucks and even an ultralight helicopter from 1991.

‘Gandini doesn't like celebrating his creations,’ explains Giosuè Boetto Cohen, curator of the exhibition. ‘What Gandini loves to talk about is what he has not yet managed to create in the here and now and what he will do tomorrow. It was bearing this attitude in mind that we worked on the exhibition which brings together all his most important cars and the story behind them, but also less well-known ideas, or ideas that never came to fruition, to which Gandini attributes an equally high value’.

The exhibition opened on January 24th and runs until May 26th at Museo Nazionale dell’Automobile in Turin, with entry at €12 for adults, €10 for concessions, €5 for accompanied children between 6 and 18, and free for children under 6 or museum season ticket holders.