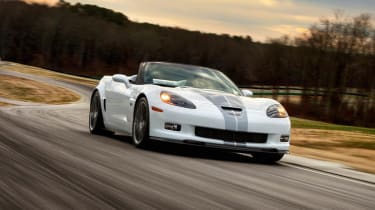 Several high profile car auctions took place in Arizona on January 20 to 21, yielding some record results. Perhaps the most significant sale was a rare alloy-bodied Mercedes-Benz 300SL gullwing sold by Gooding & Company, which went for over 4.6million US dollars (£2.6m). Just 29 were ever built. One of the more interesting sales was the first 2013 Corvette 427 Convertible to roll-off the production line, which was donated by Chevrolet and garnered 600,000 USD for charity at Barrett-Jackson’s auction. That’s £380,000, or around three times as much as you can expect to pay once official sales begin. Under the hammer at the same event was a 1969 Dodge Charger, named Lee 1 – so called because it holds the dubious honour of being the first Dukes of Hazzard General Lee, famously jumping 82 feet for the show’s title sequence. After the harsh landing it was left in a Georgia salvage yard for years, before being restored and sold. However, despite high hopes and rumours of a 1.5m USD bid, the gavel went down at 110,000 USD. That said, it was bought (in pieces) for only 400 dollars back in 2001. A 1964 Cadillac hearse that carried JFK’s body went for 160,000 USD, and a 1948 Tucker Torpedo, one of just 51 examples of the ‘Cyclops’ ever built, went for a whopping 2.9m USD.