It's the Corvette's 60th birthday coming up, so here's the most powerful Convertible version yet, the 427 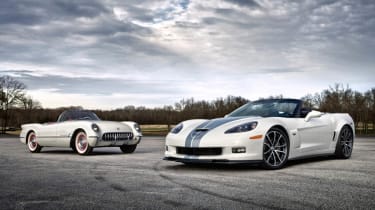 Chevrolet is marking the Corvette’s 60th birthday with a special edition. The Corvette 427 Convertible also acts as a run-out special as Corvette C6 production enters its final year, with the all-new C7 supercar just around the corner. It’s the first drop-top Vette to combine hardware from the firm’s hardcore Z06 and ZR1 coupe models. Up front sits the thunderous 7.0-litre LS7 V8 engine (427 cubic inches in size, hence the name) from the Z06, its 505bhp and 469lb ft making this the most muscular Corvette Convertible yet. It comes with one transmission option, a six-speed manual. The driveline and rear axle from the Z06 are also installed, as well as the model’s clever magnetic selective ride control. Lightweight wheels – 19in front, 20in rear – get the Michelin PS2 tyres used on the ZR1. There’s a host of carbonfibre components, including the bonnet, wings and floor panels, which leads to a 1522kg kerbweight. That aids a stonking 3.8sec sprint to 60mph and a 190mph top speed. As well as the 427 special edition, there’s also a 60th Anniversary Package, which can be applied to all 2013 model year Corvettes. This consists of an Arctic White exterior and Blue Diamond leather interior, a blue roof for Convertibles, a ZR1-style rear spoiler and a host of badges and graphics. There’s also the option of racing stripes, which are stitched into the cabrio’s soft-top, too. Sales begin with the auctioning of the first Corvette 427 Convertible by Barrett Jackson in Arizona on January 21. With the 427 sporting one of the engines built at Corvette's Wixom Performance Build Centre, you can also spec an engine build experience, where you get to piece the V8 together yourself.