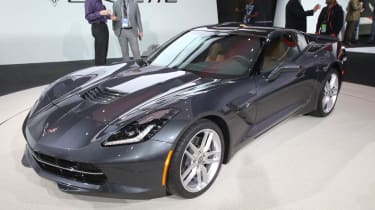 Chevrolet has announced the price for its new Corvette Stingray, which was unveiled earlier in 2013 at the Detroit motor show. At £61,495, the Stingray is more than £10k cheaper than the base Porsche 911 Carrera, and in European markets will feature the Z51 performance pack as standard. The Z51 pack features an electronic limited-slip differential, magnetic ride control suspension, upgraded springs, shocks and stabiliser bars, and an improved dry sump oiling system for cooling the transmission and differential. It also boasts larger front (345 mm) and rear (338 mm) brakes, bigger alloy wheels to house them, and an optimised aerodynamics package granting greater stability at speed. A 6.2-litre V8 engine sits up front producing a claimed 454bhp at 6000rpm (over 100bhp more than that Porsche) and 465lb ft of torque at 4500rpm. It’s mated to a seven–speed manual gearbox with active rev matching for perfect downshifts, replicating the manual option in the 911. The power figures have inflated slightly from previous reports thanks to the introduction of a new exhaust system, and mean that the Stingray will be capable of a sub-4.0sec 0-60 time and a top speed nearing 190mph. It certainly sounds tempting, but like all previous bargains from the USA, the Stingray will only be available as a left-hand-drive car from launch. Rumours that the Stingray would be available with right-hand drive have fallen deathly silent for the time being. It is also three inches wider than the 911, making it a broad car for threading through UK streets. Optional extras are minimal and straightforward. These include metallic paint (£600), tintcoat Paint (£1000), satnav (£1450) and black alloys (£550). The Corvette Stingray goes on sale in Europe in autumn 2013.