It's official: the new for 2014 Chevrolet Corvette regains the Stingray badge and debuts at 2013 Detroit motor show 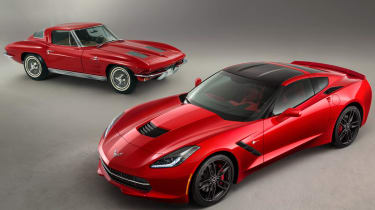 The new C7 Chevrolet Corvette has been revealed at the 2013 Detroit motor show. It follows months of speculation, with rumours that the new ‘Vette would become a mid-engined supercar. It stays true to its roots, though, with a front-engine/rear-drive layout and a 6.2-litre V8.

Full 2013 Detroit motor show coverage here  It also harks back to perhaps its most legendary ancestor by gaining the Stingray name, thanks, apparently, to its perfect balance of technology, design and performance. It’s still recognisably a Corvette, but shares only two parts with the outgoing C6. It looks bold, though you may be able to spot references from elsewhere – the Lexus LFA-like rear, Nissan GT-R-like windowline and Audi R8-like dashboard design included. The frame is made of aluminium and some body parts, including the roof, are carbonfibre, helping reduce weight and also create a 50/50 front/rear weight distribution. The V8 engine is said to be all-new, and gains direct injection, active fuel management and variable valve timing. It produces (an estimated, for now) 450bhp and 450lb ft, good for a 0-60mph time below 4.0sec and a top speed that’s likely to top 190mph. It’s mated to a seven-speed manual gearbox – like the 991-gen Porsche 911 – which boasts rev matching on downchanges to negate the need for heel-and-toeing – as seen on the Nissan 370Z. As is the way with the current crop of sports cars, there’s also a five-tiered Drive Mode Selector (with Weather, Eco, Tour, Sport, and Track profiles) to tweak various parts of the Corvette’s character. A ‘Z51 Performance Package’ includes an electronic limited-slip differential, dry-sump oil system, a different aero package and optimised brake, differential and transmission cooling. The 2014 Corvette Stingray will be built at the same site as its predecessors in Bowling Green, Kentucky, with a multi-million dollar upgrade seeing the aluminium frame built in-house. Sales of the new Corvette start in the autumn in the USA, with official left-hand-drive imports to the UK expected shortly after. Expect to pay upwards of £50,000, though that does buy a car that betters the power and performance of an £87,000 Audi R8.