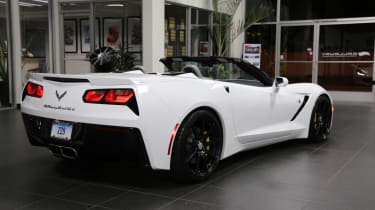 American tuning firm Callaway has turned its attentions to the latest Chevrolet Corvette Stingray to make one of the most powerful versions of the seventh-generation Corvette yet, the SC627.

The firm has liberated an extra 167bhp from the Corvette’s 6.2-litre LT-series V8, for – as the name suggests – a maximum output of 627bhp at 6400rpm. Torque has increased too, swelling by 145lb ft over standard to 610lb ft at 4400rpm. The company boasts power and torque improvements all the way from idle to the red line.

The increases come courtesy of Callaway’s new supercharger setup and single acoustic chamber exhaust system, promised to minimise restriction and improve the car’s aural qualities. As well as the new forced induction setup, Callaway has worked on cooling – a vital aspect to ensure cool, dense air is forced into the cylinders to maximise the car’s power potential.

A new liquid-to-air intercooler design and raised supercharger housing (the latter to improve heat convection) all contribute to cooling, while an update to the company’s intake manifold design liberates an extra 57lb ft of torque over Callaway’s last tuned Corvette.

Exterior alterations are relatively minor, amounting to distinctive badging and carbonfibre manifold base covers. Inside, there are Callaway-branded embroidered mats, door sill panels and unique badging.

Upgraded models are already rolling out of Callaway’s Connecticut and California facilities, and buyers can opt to pick up their cars – while writing a cheque for $22,995 (c£13,700) – at either Callaway’s factory or the National Corvette Museum in Bowling Green, Kentucky.