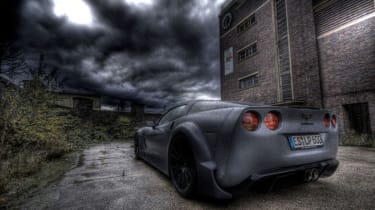 German tuner Loma Performance has unleashed this rather mean Corvette. It’s even got a mean-sounding name, the BlackforceOne, and comes with some suitably aggressive performance figures – 666bhp, a top speed of 205mph and a hypercar-quick 3.4sec sprint to 62mph. Similar numbers to the Corvette ZR1, incidentally. It’s all thanks to twin-turbocharging of the Corvette C6’s stock 6.2-litre engine, which actually boosts power to a slightly nuts 783bhp at the engine, but that’s down 15 per cent by the time it reaches the rear wheels. They still have to handle nearly 250bhp more than they do in the standard C6, though… And if you’re concerned the slightly unsophisticated Corvette may struggle, then Loma has answered your worries. There’s a carbonfibre sports clutch, new carbonfibre drive shafts and an overhaul for the gearbox. Happily the suspension gets a look-in, too, with a coilover arrangement allowing separate adjustment of pressure and rebound damping, while the stabilisers can be tweaked as well.  There’s the option to specify a set of carbon ceramic brakes to provide ‘brutal deceleration to match the brutal acceleration’, apparently. Nice. The setup saves 15.5kg at the front axle and 10kg at the rear. Those monster brakes are shrouded by some appropriately black OZ alloys, which come wrapped in Michelin Sport Cup rubber. If you’re taken by the BlackforceOne, then move quickly. Just 25 will be made, and fear not, each one comes numbered to show people just how special it is. The car will set you back 190,000 euros (currently £173,000) with a 12-month guarantee on the OTT engine tuning. You’ve got a wealthy choice of colours, but the key three are the fantastically named Stealth matt black, Eurofighter matt grey and White Storm matt white. Click to read our group test involving the 638bhp Corvette ZR1 Head to Loma Performance’s website to find out more (or buy…) Follow evo on Twitter for the latest performance car news