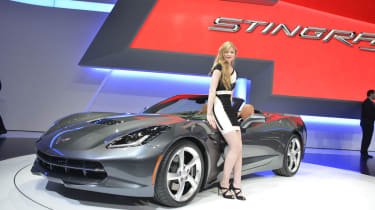 The new convertible version of the recently launched Corvette C7 has been revealed at the Geneva motor show.

The Convertible is powered by the same 450bhp 6.2-litre V8 engine as the Coupe, and with the weight difference negligible, performance is expected to remain close to that of the Coupe – with a 0-62mph time of under four seconds.

There is very little weight difference between the Coupe and Roadster because GM designed the Corvette as a convertible from the outset, meaning structural reinforcement was not necessary.

As with the previous Corvette, the C7 uses an electronically-operated fabric roof, which can be raised or lowered at speeds of up to 30mph. It is unlikely that the Corvette will be officially imported into the UK, and there are no plans to offer a right-hand-drive option.