The ZR1 has always been the ultimate Vette, and this one’s the most powerful yet 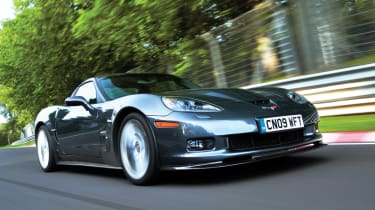 In Europe, the Chevrolet badge is these days affixed to Korean-built budget cars, but in the US it’s still good old Chevy, and its flagship – just as it has been since the ’50s – is the Corvette. Now in its sixth generation, the Vette isn’t the most sophisticated of beasts, but in ZR1 form it boasts genuine supercar performance.

Back in 2009, the peak power figure of 638bhp was pretty eye-widening, but it was the ZR1’s torque that dried the mouth – 603lb ft, and all of it available at 3800rpm. Fortunately, the wheels hid huge carbon-ceramic discs, while weight was kept down to 1528kg by using carbonfibre for the roof, bonnet, splitter and front bumper. On paper, it all looked so promising, and at only a smidge over £100K, arguably the performance bargain of a generation.

And what an engine. A polycarbonate window in the bonnet-bulge revealed the aluminium top cover of a wide and low, air-to-liquid intercooler. Below was an Eaton supercharger delivering up to 0.72bar of boost. The ZR1 had extraordinarily long intermediate gearing – with second good for 96mph and third for around 130(!) – but with so much torque it didn’t really matter. Flatten the throttle and the fastest road-going Vette ever made hurled itself violently towards the horizon. Trouble was, the car appeared to grow around you like some Alice in Wonderland fairground ride, its extremities becoming more and more remote. The Magnetic Selective Ride Control dampers sought to add a layer of chassis sophistication, but as evo’s 2009 test showed, the Touring and Sport settings proved equally unsatisfactory, rendering the suspension either under-damped or rock-hard… What’s more, on gargantuan tyres, it tugged, weaved and tramlined all at once. What the ZR1’s claimed 7min 27sec lap of the Ring must have been like is unthinkable…