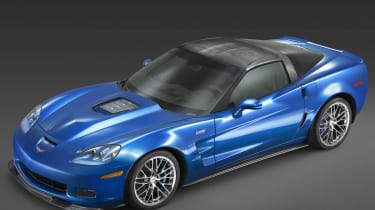 The Corvette ZR1 officially hits the UK from next month, but you’ll be lucky to see one on the roads, never mind buy one. GM is planning single-figure annual sales on these shores, with only two ZR1s being delivered in 2008. Anyone who shells out the £109,000 price tag will received advanced driver training to learn how to handle their brand new 205mph, 6.2-litre V8 car which cracked the production car record time at the Nurburgring’s Nordschleife of 7min26.4sec. The cars will also come complete with a three-year, 60,000 mile warranty and three years of breakdown cover – a sensible concession on a mad car. While we bemoaned a £100k+ Corvette, how many other cars that go north of 200mph can be bought for this kind of money? And if you had a spare £109k, would you throw it Corvette’s way? Click here, and tell us now. You can read about our first drive of the ZR1 in evo 123, on sale now.