DS 3 review - Does French hatch match a Mini for fun? - Engine and Gearbox 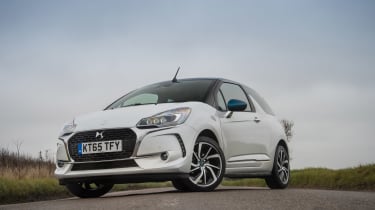 A diverse mix of engines and transmissions here; the DS3 comes with a choice of three, three-cylinder petrol units with 80bhp, 108bhp and 128bhp, and a pair of 1.6-litre turbocharged four-pots, a THP with 162bhp and the Performance with 205bhp.

The THP models are only offered with a six-speed manual, the same gearbox used with the 1.6 BlueHDi 99bhp and 118bhp four-cylinder turbodiesels. If you want an automatic gearbox, the sole option in the range is the 108bhp PureTech 110 - a six-speed unit.

The greatest shame with the more powerful petrol engines is that they don't sound that great: Neither is as smooth as that of its Mini rival and even the Performance model, in which you'd hope for a fruity exhaust note, it drones rather than barks. The three-cylinder units are more pleasant, thrumming smoothly along like most of their contemporaries, while the diesels are diesels - aural appeal comes second to a slug of usable mid-range torque.

If the greater performance isn’t enough to convince you into one of the more powerful versions then the quality of the five-speed manual’s shift might. It’s not the most precise movement across its gate and that's exacerbated by its relatively long throw. The six-speed manual improves things a bit, but it still lacks the quick accuracy of the best of its rivals. The auto is much better than it used to be, but the limited engine range means it may not appeal to many.