DS 3 Crossback to combine both I.C.E and EV powertrains on all-new platform 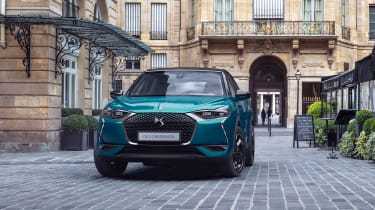 PSA’s premium brand, DS, has revealed its all-new DS 3 Crossback, a compact pseudo-SUV replacement for the DS 3 hatchback. Rather than directly replacing the three-door hatch, this new model has gained a pair of rear doors and a few extra inches of body height, but size-wise is smaller than premium compact SUV rivals such as the Audi Q2 and BMW X2.

As well as hoping to bring some chic Parisian style to a compact, high-riding model, it is also one of the first premium cars to offer both internal combustion engine (ICE) and full-electric powertrain options, the latter known as E-TENSE.

The DS 3 Crossback range will initially be topped by a 155bhp turbocharged three-cylinder ‘Pure Tech’ petrol engine, with lesser 130bhp and 110bhp versions also available. A six-speed manual gearbox is standard across the range, with an eight-speed auto available on the 155bhp car. A 1.6-litre diesel will also be offered, but for those looking for something even greener, the aforementioned E-TENSE version will likely hit the spot.

The electric model's powertrain comprises a single 136bhp electric motor, fed by a 50kWh battery pack mounted under the floor. DS says that it’ll have a 186-mile range under WLTP regulations and be able to reach 62mph in 8.7 seconds.

To be able to accept an electric or an ICE powertrain, the DS 3 Crossback is built on PSA’s latest CMP architecture that will go on to underpin everything from the next Peugeot 208 GTi to next Vauxhall Corsa.

Visually, the DS 3 Crossback is certainly distinctive, sharing design elements with both the DS 3 hatch and larger DS 7 Crossback. One notable design element is the ‘shark fin’ B-pillar that first appeared on the DS 3, while the narrow LED head and tail lights look sleek and sophisticated as they intersect within the brightwork that sits at the front and back. It’s also interesting to see concept car-like details – such as the flush door handles and ornate LED headlights – reaching production, even at this lower end of the market. Overall it’s arresting, and at the very least interesting.

Inside, the quirkiness continues, with DS’s signature diamond motif continued in the switchgear and air vents. Atop the upholstered dash is a wide 10.3-inch infotainment screen, while in front of the driver sits a compact speedometer, topped with a head-up display.

DS hasn’t mentioned whether the DS 3 Crossback may one day undergo the Performance treatment, but as it will share its underpinnings with the upcoming Peugeot 208, which it has been confirmed will be available in hot GTi spec at some point, it doesn’t seem unreasonable to hope for a Audi SQ2-rivalling hot version in the future.

The DS 3 Crossback will go on sale from early next year, with the E-TENSE version following later in 2019.