It’s a brave new world for Vauxhall’s new Mokka-e, and indeed Vauxhall itself 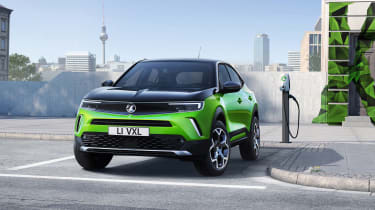 There has been much change at Vauxhall over the past few years, driven most progressively by its new French ownership and renewed enthusiasm for future models. After being bought out by PSA (parent company of Peugeot and Citroën) from General Motors, the brand’s revitalisation has only been in the form of promises rather than actions (ignoring the ill-fated rush job that is the new Corsa). That changes now though, as Vauxhall reveals its most progressive new model in a generation – the new Mokka-e.

Best not confused with its ancient predecessor, the all-new Mokka-e is derived from PSA’s new CMP platform and electric powertrain that have already been utilised on the new Peugeot e-208, e-2008, DS3 Crossback and aforementioned Corsa-e. But while the Corsa was rushed into production due to an awkward life cycle clash between it and other CMP models, the Mokka-e has been given time to be formed into a more representative example of what Vauxhall hopes is the model which will reinvent the struggling manufacturer. 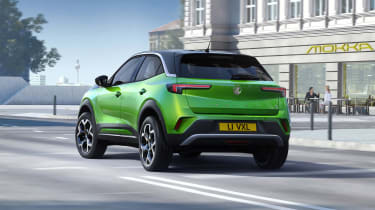 Starting with those dramatic new looks, the Mokka-e is the first new model to incorporate the ‘Vizor’ design element at the nose, a feature that will soon be spread across all Vauxhall models. This distinctive new feature is constructed by visually incorporating the front lights, badge and grille into a single glazed section that runs the width of the car. This design element is accentuated by the Mokka-e’s black bonnet, pillars and roof, creating a more separated look between the windows and bodysides themselves.

The shape itself is stock-standard compact SUV though, with typically faux-rugged elements such as black body cladding, wheelarch surrounds and plastic skid plates giving the Mokka-e at least some semblance of an off-roader. 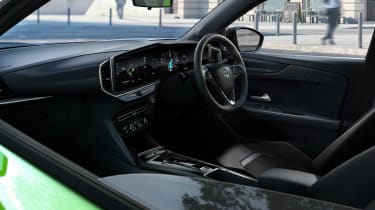 Inside, Vauxhall has made an equally big change, completely reinventing its interior layout for one that will also spread across the range. The inherent layout differs from those of its French relatives, with a twin-screen approach that spans two-thirds of the dashboard, similar in principle to that seen in a Mercedes A-class. Where the Mokka-e differs is the slight curvature of those screens and general simplicity of the dash it sits within, creating a minimalist and contemporary look that’s in complete contrast to the Corsa’s mainstream approach. The screens themselves are able to be specified in both 10- and 12-inch sizes, meaning that no matter the variant, these digital interfaces will dominate the interior.

Mechanically, the CMP platform is considerably more mainstream than it’s quirky design elements, paring the usual MacPherson front and torsion beam rear suspension onto the small modular steel architecture. The Mokka-e’s overall dimensions are smaller than before, but thanks to the CMP platform’s inherently efficient use of space, interior space is quoted to be improved over that of the previous models. All Mokka-e models will share the same 136bhp single electric motor and 50kWh lithium-ion battery pack, giving it a 201-mile estimated range on the WLTP cycle. This total range is on par with that of its in-house PSA rivals, and significantly above that of the Mazda MX-30, Honda e and Mini Electric, all of which have been caught napping by PSA’s impressive rate of EV development. Models with a standard internal combustion engine are also part of the plan, with a selection of PSA’s three-cylinder powertrains expected to join the range later down the line. 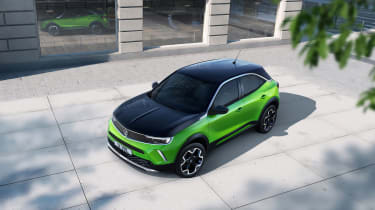 While a small electric SUV such as this will never raise the blood pressure of most enthusiasts, including us at evo, the Mokka-e is most certainly a looking glass into the future of the brand – a no-doubt important one considering Vauxhall’s considerable presence on UK roads. After years of mediocre products, the Mokka-e might not just be a hit on the sales charts, but also a purveyor of change to a whole generation of new car buyers.