As Honda’s first full-electric model nears production, it has opened reservations for the ‘e’ in Europe 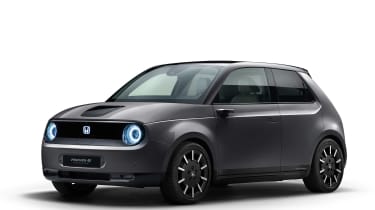 Honda has opened reservations for its upcoming electric hatchback - the Honda e. Customers in the UK, Germany, France and Norway can now register their interest ahead of its early 2020 release. Eager fans of the retro-styled model can place a refundable reservation fee of £800 via the online reservation website, allowing them to be first in line when order books open later this year. Pricing is yet to be revealed.

The e may have lost the aggressive face and squat dimensions of the concept, but it still represents a big leap for Honda – into electric cars and a totally different design approach.

Underpinning the model is a bespoke EV platform, with a single rear-mounted electric motor powering the rear wheels. Honda is quoting a total range of around 120 miles, but has not yet released any other technical details such as power, performance figures or the size of the on-board battery pack. 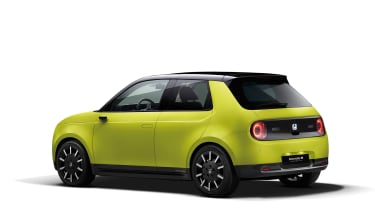 In comparison to the Urban EV Concept, the biggest change is the e’s addition of two extra doors, although Honda has gone to considerable lengths to disguise them with hidden door handles. The front handles are also sunken units, like you’ll see on an Aston Martin or Range Rover Velar, and paired with the new side camera system that is neatly integrated into the door, the result is a very concept-car like sleekness.

Look closely and the clamshell bonnet, frameless glass and sectioned roof panel all combine to create an exceptionally clean and minimalist exterior aesthetic. Full LED lighting front and rear and the slick use of dark lower surfaces add to the effect. It’s all exceptionally well thought out, considered and executed. 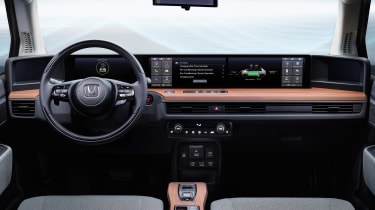 The interior, which was revealed earlier, is just as interesting, combining a row of no less than five screens across the driver’s eyeline. There are two outer screens displaying the live feed from the side cameras, a driver’s information display behind the steering wheel, and two more screens displaying infotainment information. These screens appear to rest on a wooden ‘shelf’, similar in principle to the new Mercedes A-class’s arrangement, but taken a step further, and with a simple Japanese twist.

Honda has not given any indication of price, but considering its introduction of so much new technology, we suspect the e will not act as an entry-level electric model. But as the BMW Mini proved nearly 20 years ago, a clever and attractive small car needn’t have an equally small price tag to become a modern icon in its own right. We suspect this Honda may well be the same.