The Tesla Model 3 is finally on sale in the UK, available in Standard, Long Range and Performance forms 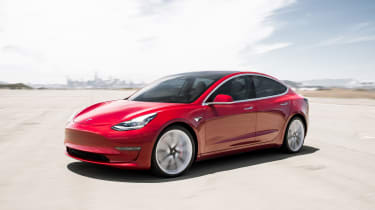 The Model 3 had somewhat of a troubled start to its life, with Tesla boss Elon Musk quoting optimistic production numbers that the company has since struggled to meet. Yet, after refining its production processes, the Model 3 has now finally gained real traction in the US, recently out-selling rivals from the likes of Mercedes-Benz and BMW in its home market.

Now Tesla has opened orders for the Model 3 in the UK, starting with the base £38,900 RWD Standard Range Plus, moving to the £47,050 Long Range, and the range-topping, M3-rivalling Performance Model 3, costing £56,050, without options. First cars are set to hit UK shores this summer.

After the initial promise of a £30k starting price, the Model 3’s £38,900 is quite a bit more than initially expected, exceeding the starting price of a BMW 3 Series by over £6000. Look at the performance on offer, however, and the entry-level Model 3 might appear to be the more appealing proposition if you’re into that sort of thing. Performance is impressive, taking a brisk 5.3secs to reach 62mph, considerably quicker than the 7.1secs of a 320d, for example. The brand’s basic Autopilot system is also standard across the range, allowing the car to accelerate, brake, and stay within its lane on motorways. Quoted range for the Standard Range model sits at 258 miles. 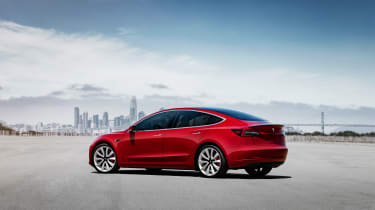 For an additional £9000 one can upgrade to the Long Range Model 3, incorporating all-wheel-drive thanks to a second electric motor mounted on the front axle, allowing a shorter 4.5sec sprint to 62mph and a bigger range of 348 miles. It also picks up a ‘Premium’ interior, giving you powered, heated seats, upgraded trim, a more comprehensive sat-nav system and a 4 speaker premium audio system.

The model of most interest to us is the Model 3 Performance. The range-topping Model 3 sprints from 0-62mph in 3.2secs and onto a top speed of 162mph. Despite the performance, range isn’t too bad either, capable of a quoted 329 miles between charges. Though you don’t get bulging arches or bonnet bumps as you do on German rivals, 20” Performance Wheels are fitted as standard alongside a small carbon fibre rear spoiler, metal pedals, red brake calipers and a Track Mode.

Dive into the configurator and you’ll find there’s not an awful lot to play with. Just five colours are available, with all but black setting you back between £950 and £1,900 to option. Standard and Long Range versions come with 18” wheels as standard and 19” Sport wheels at a £1,450 premium, with the Model 3 Performance getting 20” wheels. Though all models do have autopilot capabilities out of the factory, for an additional £4900 (or £6800 if you choose to upgrade after the fact) you can have ‘full self driving’, allowing the car to respond to traffic lights, recognise stop signs, perform lane changes and enter and exit motorways with Autopilot engaged.

Deliveries are set to start in June for dedicated customers who put their deposits down at the car’s reveal. 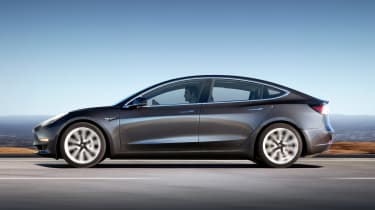 The Model 3 sits underneath the Model S executive car and the Model X SUV as an entry-level model for the electric automaker's range. With a starting price of £38,900 in the UK it’s firmly in compact executive territory, and will therefore compete directly with more conventionally powered rivals like the BMW 3-series or Mercedes C-class.

It takes the form of a five-door fastback - think Audi A5 Sportback or BMW 4-series Gran Coupe - but where the Tesla sets itself apart from the competition is with a fully electric drivetrain. While not quite capable of delivering Tesla Model S-style acceleration it will allow the Model 3 to rival its more conventional alternatives for performance, with Tesla quoting a 0-60mph time of 5.3secs for the standard car, 4.5secs for the long-range and 3.2secs for the Performance version. In terms of range, your choice between these three launch models will mean either 258, 348 or 329 miles.

The Tesla Model 3 has a big job on its hands, convincing the world that this American upstart is capable of producing a quality, mass-market product that could be considered alongside accomplished rivals. It must also prove that electric power is the way forward – that existing infrastructure can handle an increasingly electrified world.

And lastly, it must stand up to scrutiny on the road. The Model S, brutally fast and supremely smooth though it is, is an ‘evo’ car more for its performance than the manner in which it can tackle a series of corners. Will the smaller, more affordable Model 3 out-point a 3-series or Jaguar XE on the road? For that, we’ll have to wait and see. 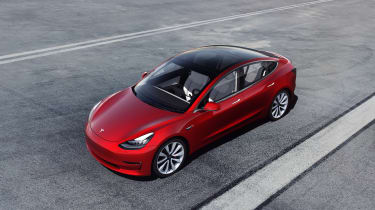 Tesla has not produced a slow car yet, and the Model 3 looks set to carry on the legacy. With a top speed of 140mph and an official 0-60mph time of 5.3s, the standard car can certainly mix-it with compact executive rivals and is roughly in the same ballpark as a BMW 330i. Go for the long range version and the top speed is 145mph and the sprint increment lowers to 4.5sec.

This won’t trouble the Model S P100D but Musk has put fans at ease on Twitter earlier in 2016 when he confirmed that the Model 3 would have its own version of Tesla’s ‘Ludicrous mode’ – also seen on the Model S and Model X. The car is offered in both two and four-wheel-drive forms, with the latter reserved for the more expensive Long Range and Performance versions, RWD coming with the Standard car. 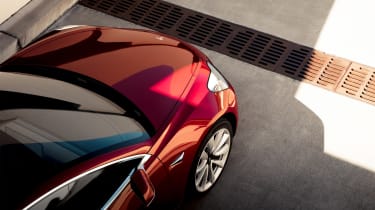 Weight distribution is split 47%/53% front to rear and a variable, speed sensitive power steering set-up takes care of the steering. The suspension system uses double wishbones at the front and an independent multi-link arrangement at the rear.

Inside, there’s a 5-seat interior that isn’t as room as that of the larger Model S and X. There’s combined a total of 425 litres of space in the front and rear luggage compartments, a little less than the 480 litres a 3 Series can get in its boot. 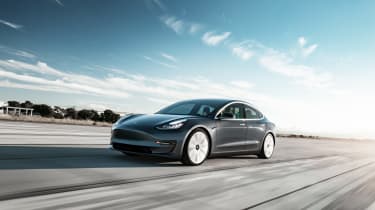 With the Model 3’s advanced lithium ion batteries and efficient powertrain, the Model 3 can deliver a range of up to 348 miles based on the new WLTP standard, stooping to a still-respectable 258 miles for the Standard Range car.

Either way those numbers are less than its Model S sibling, but they're still more than the majority of other more affordable electric cars on sale today. A Nissan Leaf, for comparison is capable of up to 107 miles on a 30kWh battery (by EPA standards), while the EPA range for a BMW i3 with the optional range extender is 180 miles. In Europe, only the updated Renault Zoe is likely to get close - with its 41kWh battery pack, Renault claims a 250-mile range on the NEDC cycle (though Renault estimates closer to 186 miles in real-world, fair-weather use).

Expect to see greater ranges from models with larger batteries in the future, but the Model 3 won’t worry its bigger brother as the smaller body isn’t large enough to fit Tesla’s 100kWh battery pack. Charging times are impressive however, with a Tesla Supercharger capable of giving the standard car a 130-mile top-up in 30 minutes. With a standard home charger, you’re looking at 30 miles of range added per hour of charging.

The Model 3 doesn't benefit from the same free charging as the Model S and Model X, however drivers can pay 0.24p per kWh when visiting a station. The more expensive cars have unlimited access to Tesla’s range of Supercharger fast charging stations for free. This is presumably to avoid clogging up the network with all the thousands of Model 3s Tesla intends to sell.

The Model 3 is vital to Tesla’s future. It forms the latest stage of what CEO Elon Musk refers to as the company’s ‘Secret Master Plan’. Step one was the Tesla Roadster, intended to show that electric vehicles didn’t have to be as awful as the few that were available at the time (such as the REVA G-Wiz). 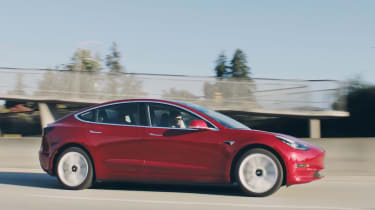 Step two was accomplished with the Model S. It’s this car that’s launched Tesla into the world of car manufacturing as a major player – positioned as it is as a mid-market, luxury executive which shows that electric cars can be practical, useful, and affordable.

And now we're on step three: the Tesla Model 3. An affordable mass-market car, which the company hopes will become as much of a viable choice for normal car buyers as any combustion-engined vehicle.

Positioned as it is under the Model S, the Model 3 is understandably smaller – but it does retain its bigger brother’s styling details. The overall shape is very similar, with a long, low body made up of smooth curves. That’s all thanks to the flexibility of the electric drivetrain, which takes up very little room.

Round the front, the Model 3 does have a curiously unfinished look due to its lack of a grille. Admittedly, the grille details on its sister cars are purely cosmetic, as the electric drivetrains don’t require as much cooling – but it does rather stick out in a world still largely populated by combustion-engined cars.

The Model 3 will be a five-seater car, and like its Model S and Model X siblings it will have two boots, one at the front and one at the rear.  It offers up an incredibly minimalist interior – every function is operated through a single 15.4” screen in the centre of the dashboard. This screen will contains driving instrumentation, with speed and gear selection displayed in the corner nearest the driver. The rest of the screen is given over to maps, media, and climate controls.

The Spartan interior doesn’t have any visible air vents, but it’s been speculated that a slim gap in the dash will provide ventilation for the whole car, aiding the hushed environment within.