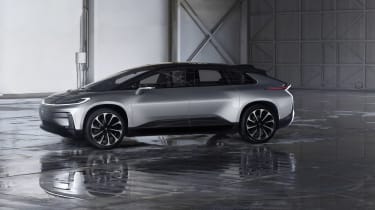 Faraday Future - one of several companies tentatively labelled with the title 'the next Tesla' - has revealed the FF 91 at the Consumer Electronics Show in Las Vegas.

It's a car that the company claims combines 'supercar performance, precise handling, the comfort of an ultra-luxury passenger vehicle, and a unique collection of intelligent internet features', and some of the numbers behind the vehicle - which is yet to turn a wheel in public - are remarkable.

First there's the benchmark 0-60mph time, quoted at an unusually specific 2.39sec, or around a tenth quicker than the Tesla Model S P100D. That comes courtesy of an all-wheel drive setup and motors developing a combined 783kW of power, equivalent to 1035bhp.

The rear wheels also get torque vectoring, and rear-wheel steering is also included. The batteries, at 130kWh of capacity (30kWh more than the range-topping Tesla) supply enough juice for an estimated 378 miles of range on America's EPA testing procedure.

By NEDC standards that figure rises to 435 miles, though the EPA figure is likely to be the more accurate of the two. Charging time, an important metric for electric vehicles, is 4.5 hours for a 50 per cent boost from a standard 240v socket, while public fast chargers should be able to supply just under 200 miles in around 30 minutes. 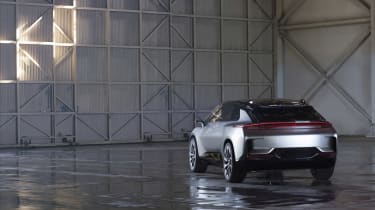 The exterior styling will take more getting used to than its Tesla rival though, with an unusual one-box form that prioritises interior volume and a particular focus on rear-seat passengers. It's original, if not conventionally attractive, but the images show a car whose proportions work better from an angle than they do in profile.

Faraday Future is also putting plenty of stock in the car's technology, from facial recognition technology to unlock the car, myriad connectivity options, and autonomous features, including driverless parking.

Faraday Future is already taking refundable $5000 deposits for the car, which is scheduled to enter production in 2018.

The question however is whether the car can make it to production unscathed. Startup electric vehicle firms have proven notoriously unsuccessful (remember Fisker? Aptera? Coda?) with only Tesla managing to defy expectations and enter competition with established brands.

With rumours Faraday Future is burning through money and the recent departures of several executives - not to mention the all-too common trope of ultra-high performance and high range claimed by startup electric vehicle makers - we'll have to wait and see whether the striking FF 91 will make that 2018 production date.