Latest Corsa is a refined and talented supermini, but keen drivers would still be better off with a Fiesta 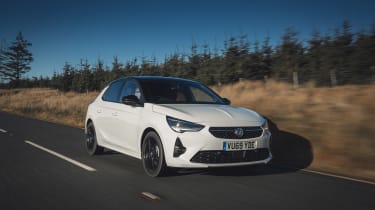 If you grew up in the UK and got your licence in either the 1990s or 2000s, your first car list probably boiled down to one of the following four choices: Fiesta, Saxo, Clio, or Corsa. Inexpensive to buy, simple to run and seemingly available around every street corner, the freedom they offered more than made up for any lack of performance the most insurance-friendly models might have offered.

Superminis are still big business today and most of the major players are still around, though several generations of development makes today’s Fiestas and Clios unrecognisable from their forebears.

The same applies to the new Vauxhall Corsa, but to an even greater degree, as the latest model finished its development under PSA ownership, so shares its underpinnings with the similarly fresh Peugeot 208, and the next superminis from Citroën and DS. Always popular but not always entertaining, does this French connection turn the Corsa into a driver’s car? 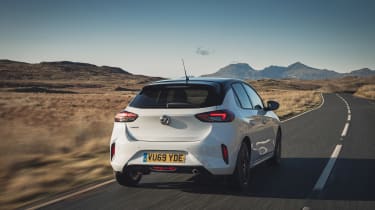 The SRi Nav Premium model tested here is powered by a PSA-sourced 1.2-litre, three-cylinder turbocharged engine, also found in the Peugeot 208, among others. It’s good for 99bhp – a round 100 PS in the marketing materials – at 5500rpm, with 151lb ft of torque developed from just 1750rpm, promising decent flexibility.

An automatic gearbox is available, but this particular car has a six-speed manual. Drive is to the front wheels alone, and as a gently sportified model rather than a pukka hot hatchback, there’s an open differential and no clever electronics going on at the front wheels other than standard traction and stability control systems.

Vauxhall quotes a 0-60mph time of 9.3sec, and a top speed of 121mph, aided by a relatively spry 1090kg kerb weight despite all the on-board luxuries. It’s as quick as you’re going to get from a Corsa in the near-term, unless, that is, you prefer electric power – as the Corsa-e sold alongside makes 134bhp and gets to 62mph in 8.1sec. 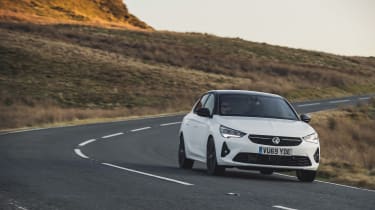 The Corsa’s makeover is as dramatic as you’d expect given its new shared PSA platform. Despite being 39mm longer and 19mm wider than before, it also sits 44mm lower overall and more significantly, is up to 108kg lighter than the previous car, down as low as 980kg in the simplest variants. The body-in-white alone is 40kg lighter, while all-aluminium engines, lighter seats and an aluminium bonnet all contribute further.

It’s also five-door only this time around, joining not just its PSA peers but also cars such as the Renault Clio and Suzuki Swift in ditching a three-door variant. Vauxhall still claims best-in-class aerodynamics – a drag coefficient of 0.29 isn’t bad at all on a compact car such as this, which tend to struggle with aero – while there’s also a large suite of safety features, infotainment improvements and available LED headlights. 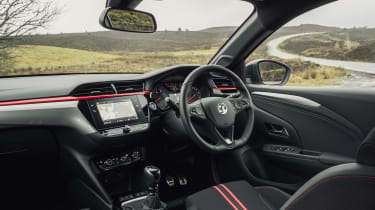 The last few generations of Corsa have felt surprisingly solid, but the latest model adds understated style and a more welcoming interior ambience to the mix. The Corsa’s cabin wouldn’t look out of place in an Astra, with decent material quality, a broad touchscreen in the centre of the dash, and in this SRi Nav Premium model, a welcome splash of colour with red stripes through the dashboard and sports seats.

With a conventional dashboard layout it’s immediately more accessible than its Peugeot 208 cousin, and the conventionally sized steering wheel makes it easier to find a decent driving position – from where you’ll notice good visibility, well-spaced pedals and a light gearshift action. It doesn’t actually feel much like a PSA product, which will either be a blessing or a curse depending on your view of French cars.

Early impressions are good on the move too, with decent pep from the 1.2-litre three-pot and faithful steering response. Refinement is good and the fairly modest wheel and tyre combo seems to soak up road zits without excessive body movement. 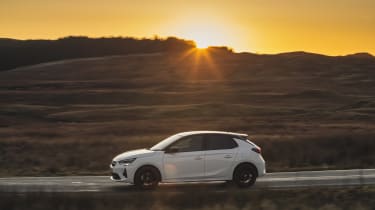 It’s less inspiring as you up the pace though. The engine is the primary culprit, as while it feels strong at low revs, the throttle seems to be calibrated to give you everything the engine has in the first half of its travel. Just as you think a further press will liberate even greater pace, nothing much really happens, and hanging on to the revs produces more noise than useable power. The performance itself is decent, but the delivery is unsatisfying.

Gearchanges don’t help much either, partly due to a lever that moves quickly enough but offers little interaction, and partly because of a significant flywheel effect that causes the revs to hang between changes, resulting in either a slow change, or a fast and lurching one.

In isolation, the Corsa’s chassis is nimble and responsive enough, and remains composed while you’re applying the old ‘slow car fast’ maxim, but like the gearchange and throttle, you get little back from the experience. There’s ability but little interaction; this platform is begging for a proper performance model with more bite. 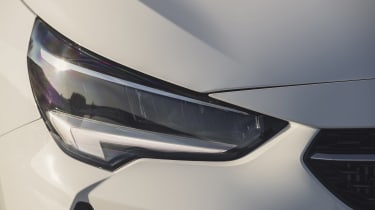 If there’s one thing all those 1990s superminis had in common, it’s that they seemed to be available for pennies. Include inflation and things haven’t actually changed that much, but this car’s basic price tag of £20,665 still stings a bit, even if a three-year warranty and combined economy of up to 52.3mpg should make it inexpensive to run.

Our test car is just a touch more at £21,315, which includes £650 of metallic red paintwork, and a £110 full-size spare, but those two options aside, the SRi Nav Premium is fairly well-equipped in the first place – it’d be easier to list what it doesn’t have than what it does.

Rivals are numerous and talented. Ford’s Fiesta is still top of the tree for handling in this class, even if you ignore the hot ST version. The Corsa’s French cousin is also well worth a look, with a sci-fi cabin design, attractive exterior styling and a more engaging drive, while Mini’s One and Cooper hatchbacks also offer plenty of fun at this kind of price point.