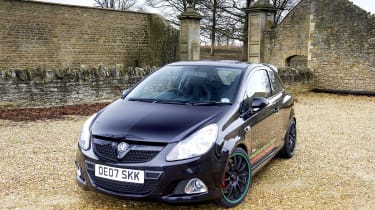 On paper that’s a crazy amount of grunt for a small front-wheel-drive hatch to deal with, but the after-market crews benefit from the groundwork laid down by Vauxhall, not least in the form of the very clever electronics found across the VXR range. Subtle traction control systems give the chassis a fighting chance of exploiting such explosive power, and perhaps this goes some way to explaining why the tuning fraternity are so keen to turn the wick way above the standard Corsa VXR’s 189bhp.

The VXR-R is further helped by the addition of a Quaife limited-slip differential and an engine map that delays the full 290lb ft thump of torque until the revs have climbed to 4900rpm. Of course, despite all this smart engineering it’s still pretty wild, although it’s gigglesome rather than terrifying and you won’t vaporise the Toyo rubber every time you squeeze the throttle – unless you really want to. In fact the VXR-R is far more exploitable than it has any right to be and fizzes down the straights thanks to the remap, a new intercooler, race injectors that are 40 per cent larger than standard and a Milltek Sport 70mm exhaust system that, although obviously very effective, doesn’t pop and crackle quite as much as the pyrotechnic Remus offering on the 888 Corsa.

Turn into a corner, squeeze the right pedal and you’ll feel the diff doing its thing as it juggles the power between the front wheels like a hot potato and claws the Corsa out of the bend. It’s an impressive trick, helped by a sharp chassis set-up that, perhaps unsurprisingly, reacts like a race car. On a balanced throttle the nose grips hard while the looser rear creates adjustability and the opportunity to trim your cornering line. It feels great, flows beautifully and allows you to carry far more speed than you’d think possible. Uprated springs, adjustable dampers and a 40mm ride-height reduction are at work here, and yet despite running so low and hard the ride is surprisingly compliant.

These changes help the Corsa’s profile too – the standard car appears to be on tip-toes in comparison – while the green-lipped 18in Team Dynamics wheels complete the job. Behind their black spokes are four-pot, 340mm AP Racing brakes up front, and they shed speed in a serious hurry. If I was to be picky then I’d want more instantaneous bite right at the top of the pedal, but this is typical with a quad-piston set-up and once you’ve passed through the first inch of travel the performance is reassuringly effective.

The one thing Thorney hasn’t been able to alter is the variable electronic steering system, which has always been the Corsa’s weak point. It’s light around the dead-ahead, lacks detail, and the artificial weighting just adds stodginess once in a turn. With there being so much going on at the front-end this is unfortunate, as it makes accuracy and consistency more difficult to achieve than it should be, particularly when the road gets bumpy. That aside, the VXR-R is a hoot on the road and would also make a great companion on track, where the smooth surfaces would make the steering less of an issue.

If the full vindaloo VXR-R is a little too hot for your taste or budget (it costs £22,495), there’s also a slightly less spicy, less pricey VXR-S with 220bhp and a £18,295 price tag. Both models have Vauxhall’s blessing, being available through the 56 Thorney Performance Centres dotted around the country within Vauxhall’s dealer network. All the parts can also be retro-fitted to any VXR Corsa – expect to pay around £9K if you want to turn yours into a full VXR-R.

Thorney Motorsport has produced a similar tuning range for the VXR Astra as well, offering S and R versions endowed with 280bhp and 300bhp respectively. If it has weaved similar magic as it has done with the Corsa, the Astra VXR-R might just be enough to give the new Focus RS a run for its money…