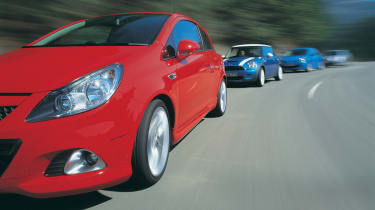 We’re all heading south to link up with the rightly celebrated N85 (aka Route Napoleon) and, ultimately, a rendezvous with the Corsa in Dignes les Bains, the town cradled by some of Europe’s finest fast-driving roads and on which recent eCoty scores, savagely fought, have been decisively settled. If any recalcitrant nuggets of genius exist, here’s where they’re most likely to be prised out.

The ageing Cupra, some might suppose, is purely along for the ride, a makeweight with no chance of upsetting the most rickety of apple-carts, let alone its more glamorous, high-profile rivals. Don’t believe a word of it. It may look like the runt of the current brat-hatch crop, built on the platform of the previous generation Polo and saddled with a mere five-speed gearbox, but there isn’t much SEAT doesn’t know about spicing up unpromising-looking ingredients.

And that 178bhp 1.8-litre 20-valve turbo four from the old Audi TT needs no apologies at all; it remains a terrific powerplant that tugs all the more potently in the flea-weight Ibiza – 0-60mph in 7.1sec is bang on the money. On the run from my home in Whitstable to Folkstone, the Cupra even begins to feel as if it might be concealing at least one weapon of mass destruction beneath its dumpy, frumpy exterior: a personality. A likeably focused old-school personality at that – all darty, punchy, throaty enthusiasm, narrow-shouldered threadability and, on broken-surfaced British B-roads at least, a pretty lousy ride. In the not-so-brave new world of the slick, suave and sanitised junior hot hatch, it might just be a dangerously addictive commodity.

There’s personality and there’s PERSONALITY of course. The good folk at BMW know all about the 20-metre-high billboard version. It’s an interesting tactic when you consider that with a ‘mere’ 172bhp, the Cooper S comes bottom of the horsepower league in this group. Engine capacity isn’t an excuse, either – the Corsa has a 1.6 too, and posts 17bhp more. Then again, the Mini weighs a tidy 1130kg and, with the help of its twin-scroll turbo, packs a thumping 192lb ft of overboost torque maintained all the way from 1700 to 4500rpm. Moreover, BMW says its Valvetronic valve management system virtually eliminates turbo lag by doing away with the conventional throttle butterfly and, since valve timing is also controlled on the outlet stroke, that’s why so much of the torque is available at low engine speeds. The quoted 140mph max and 7.1sec 0-62 are nothing to be sniffed at.

It’s all in the name, of course: ‘197’, brake horsepower, that is, making the Renault easily the most powerful car of the four. A development of the previous-generation Clio’s 182 unit, the new, naturally aspirated 2-litre motor has been treated to a redesigned variable valve-timing system, which aims to improve driveability at all speeds. A contentious claim if ever there was one, and rather bewildering in the light of its modest 159lb ft of torque at 5550rpm and porky 1240kg kerb weight. You begin to wonder if six speeds are actually enough. Renaultsport’s repost – and it seems that it’s sticking to it – is that the engine spins to 7250rpm, so what it lacks in mid-range brawn, it more than makes up for in top-end bite. The 6.9sec 0-62mph claim seems to confirm it.

And the Ibiza looks like a spud with fancy 17in alloys. I can almost sense it shrug and mutter ‘Bring on the insults… I can handle myself’. True enough, on the cruise down to Grenoble, where we’ll spend the night, it’s fine, fast company. With 181lb ft of torque at 2000rpm to back up the 178bhp, it doesn’t seem unduly handicapped by its lack of a sixth speed, and the gearing in top is well chosen to exploit the buoyant mid-range energy of the turbo motor and deliver a reasonably relaxed 3800rpm at an indicated 90mph.

That said, the Cupra has the basics down: good driving position with no nasty offsets, seats that strike an effective balance between comfort and support, a steering wheel that’s sporty but doesn’t try too hard to impress (the advantage of which will become more apparent as the test progresses), easy to use controls and excellent all-round visibility.

But by the time we decamp at a Campanile on the outskirts of Grenoble, John and I are happy to have seen the journey through with our original steeds, the slightly quieter interior noise levels and more supple ride of Hayman’s Mini being offset by the more comfortable seats of my, er, SEAT. Roger and Kenny in the Clio, however…well, their ears are still ringing. The 197 has many charms, but its low-geared, frenetic motorway cruising style isn’t one of them.

We’re asleep when Henry and Owen hit downtown Digne in the middle of the night, but, the following morning, the Corsa’s position in the car park couldn’t be more obvious if it was on fire. Thanks to British design chief Mark Adams, it’s sexier, squatter, longer, wider, sleeker and more muscular. And, even in cooking trim, it looks great as a three-door.

Just sitting in the Corsa, with the engine switched off, feels cool, and it has the best driving position and the grippiest, most figure-hugging seats The next raft of sensations aren’t so promising. At tickover and light throttle openings, the engine sounds deadly dull.

The Clio, of course, is powered by a large-capacity, normally aspirated engine – which behaves almost exactly like a small, high-revving one. To say that it’s hard work compared with the others is understating the case by an almost comic margin. All right, the performance is delivered with vast enthusiasm but, ultimately, it posits a nagging thought: has this thing really got nearly 200bhp? The modest torque and deluxe weight figures provide the clues. Perhaps the tubbiness is down to the air conditioning, electric windows, cruise control, CD player and key-card entry that all come as standard?

In a straight line, though, the Cupra 1.8 20V T easily has its measure. The SEAT’s turbo motor isn’t nearly as free-revving as the Renault’s and it’s much more raucous when worked hard, though the rorty engine note is nicely redolent of twin-cams past (that old-school vibe again). But it simply pastes the Clio for instantly accessible overtaking shove.

The Mini’s burbly exhaust and throaty growl are even more evocative of the good ol’ days than the SEAT’s, and are packaged with low- and mid-range punch that, compared with the Clio’s, is positively concussive. Unlike the SEAT, though, it doesn’t run out of ideas at high revs and hauls with undiminished vigour to the red line. With such a potent combination of grunt, aural charisma and revvability, everyone thinks BMW’s smallest hatch has the best engine of the group.

As the miles pile on and the scenery blurs, the Clio is increasingly frustrating. Its steering is more linear than the Mini’s but ridiculously light. And while the 197’s controls on the whole feel positive and precise, they also feel curiously detached, aloof and synthetic. For all that, though, the Renault has an astonishingly accomplished chassis. In the 197 you can brake later, turn-in harder and carry more speed through to the exit. Torque-steer is virtually non-existent, the tenacity of the chassis’ grip and its general economy of motion freakishly good.

If Vauxhall’s intention has been to fake the Clio’s dynamic signature but empower it with an engine that’s a more even match for the Mini’s, it hasn’t done a bad job. Apart from the slight stickiness to the steering, it turns in keenly, grips gamely and even has a measure of the French car’s benign throttle-adjustability. But it’s no Cooper S in this respect, and the ESP safety net is ever tautly strung in readiness. Can it keep up with the Clio? Most definitely. Does it ride with similar supple aplomb? Almost.

We need one final trial. And in one two-mile stretch of demonically twisted hill, we find it. It’s flat-out from bottom to top, no quarter given. Henry in the Mini leads, followed by Hayman in the Cupra, me in the VXR and Roger in the Clio. Straight by straight, the Clio is falling away from the pack. It makes up a little ground under braking and through the bends, but the general trend is backwards. The plain and bitter truth is, it can’t keep up. And for the car that’s the protector of the Clio Trophy’s awesome reputation, that’s about as bad as it gets.

It doesn’t mean the wooden spoon for the 197 – its chassis is far too good for that – but the truth is that the last-place Ibiza is the more balanced and entertaining package. But it’s also the most dynamically compromised. The SEAT’s more fun than the Corsa, too, though the Vauxhall beats it hollow in every respect save straight-line pace. It’s a good car, the VXR, but perhaps not quite the one we were expecting. For a hot hatch, it makes a remarkably fine miniature GT, but we searched in vain for the thrill gene.

Which leaves the Mini Cooper S. It’s far from perfect, its speedometer is too big, and pick the tastiest kit from the options catalogue and you’ll probably spend too much. But the Mini gives you a buzz. Every car here can do the business on great roads, but the Cooper S is the only one that makes you want to get up early to find them. A hero? Work in progress.