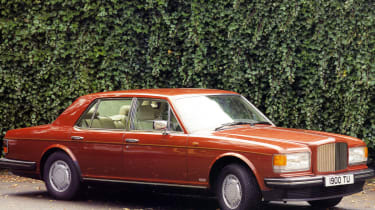 For decades, Bentleys were basically just rebadged Rolls-Royces, pale shadows of the Le Mans-winning monsters of the 1920s. That was still true in 1980 when the then-new Mulsanne (ironically named after the Sarthe circuit’s famous straight) was launched. Behind the grille it was really just a Silver Spirit. Behind the scenes, however, plans were afoot to give the driving enthusiast real reason to favour the cars wearing the winged ‘B’ badge.­

As early as the mid-1970s, David Plastow, managing director of Rolls-Royce Motors, had been keen to introduce a higher-powered Bentley. His initial idea was for it to be a version of the flagship Rolls-Royce model, the Camargue, but with a turbocharger added to the venerable 6.75-litre V8 to increase performance. There was a problem with this plan, though. Because the Camargue’s Pininfarina-styled bodies were coachbuilt by Mulliner Park Ward, offering a more powerful Bentley version could easily have created a demand that simply could not be met, so the Camargue idea was abandoned.

The idea of a turbocharged Bentley was not, however, so while the engineers at Rolls-Royce concentrated on the development of the forthcoming Silver Spirit/Mulsanne, engine tuning specialist Broadspeed was asked to investigate the viability of turbocharging the Rolls-Royce V8. They did this using a Silver Shadow, and the results – massive 50 per cent increases in power and torque – were hard to ignore. A turbocharged version of the Mulsanne was approved.

Back at Crewe, a team of six engineers headed by project manager Jack Read began work on creating a Mulsanne Turbo. Finding there wasn’t the space in the new car’s engine bay for two turbos (one for each of the V8’s cylinder banks) the team settled on a single Garrett AiResearch unit. When the set-up had been fine-tuned to achieve the required levels of refinement, the resulting figures, although never officially quoted of course, were around 300bhp and 450lb ft of torque – enough to see the Turbo get from a standstill to 60mph in just 7sec (3sec quicker than the standard car) and on to 100mph by 17.9sec (compared to over 30sec for the non-Turbo car). Due to the limitations of the tyres available for the 2.2-ton Mulsanne at the time, the car’s top speed was limited to 135mph.

To cope with the increased forces, the three-speed General Motors automatic gearbox was uprated and more substantial driveshafts and stronger CV joints were also fitted, but the suspension remained unchanged from the normally aspirated car. Visually, the Turbo differed little from the standard Mulsanne too, gaining just a body-coloured radiator surround, a new wheel design and ‘Turbo’ badging on the bootlid and front wings. Inside, there was no sign of a boost gauge, although, as in the Rolls, there was no rev-counter either!

The new car was unveiled at the Geneva motor show in March 1982 and first driven by the press and dealers shortly afterwards at a launch at Le Mans (where else?). The Guardian called the Mulsanne Turbo ‘indecently fast’, while some early customers suggested it was too fast for the suspension it rode on (something that would be addressed when the model evolved into the Turbo R in 1985).

But such complaints did little to harm interest or sales. Priced at £58,613 (£6500 more than the standard Mulsanne), the first ‘blower’ Bentley in 50 years proved to be a huge success. Where just a few years earlier Bentleys accounted for less than 5 per cent of the cars leaving Crewe, the Turbo would help see that rocket to almost 50 per cent, transforming Bentley from a loss-making entity to a profit-making one in the process. But perhaps the Turbo’s most important achievement was that, by bringing a unique, sporting model to the marque’s line-up, for the first time in decades Bentley once again had an identity of its own.