Birth of an Icon: TVR Speed 12

The only car to get eleven and a half stars in an evo road test, the bonkers TVR Cerbera Speed 12 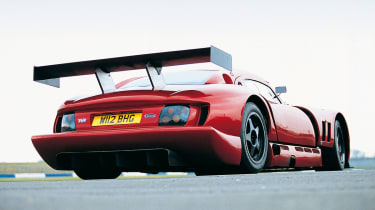 In today’s post-Veyron rush to build the most apocalyptically rapid cars the world has ever seen before the environment police impound all the keys, the TVR Cerbera Speed 12 would fit right in. But 14 years ago, the idea of a road car weighing 1100kg with nearly 900bhp wasn’t so much unprecedented as unhinged.

Project 7/12, as it was first known, debuted at the 1996 Birmingham motor show and, predictably, it caused a sensation. The possibility that it might actually be quicker than the McLaren F1 wasn’t vigorously denied by Peter Wheeler though, unlike the F1, the Speed 12’s development brief was heavily biased towards a career as a GT1 class endurance racer with the aim of taking it to Le Mans.

The 7/12 project tag denoted the proportions of its monster engine, essentially two Cerbera Speed Six straight-sixes spliced together, utilising a steel block, further developed by TVR’s John Ravenscroft to make a 7.7-litre V12 developing… well, that’s always been the matter of some conjecture. The story goes that it snapped the input shaft of the 1000bhp-rated dyno initially tasked with finding out. When TVR’s engineers then measured each bank of cylinders separately at 480bhp, a rough estimate of 960bhp was suggested, though the figure eventually quoted ‘officially’ by TVR was 800bhp.

This was for the road car. As a would-be GT1 class Le Mans racer, FIA regs required the TVR’s mammoth output be pegged back to around 675bhp by intake restrictors. Not that the Speed 12’s competition career lasted very long or shone very brightly, the car notching up a few outings in the FIA GT Championship before a sudden rule change to accommodate purpose-built GT1 machines such as the Porsche 911 GT1 and the subsequent withdrawal of the class in other championships effectively made it obsolete. It never did race at Le Mans.

But this gave fresh impetus to the road car.  The ultimate TVR would run the full-house 800bhp engine and cost £245,000, and the now badged Cerbera Speed 12 was ready in 2000.Deposits began to pile up, and a new race car was rolled out, too, this time to compete in the GT2 class where it would win several races, though dogged with reliability problems.

But the Speed 12’s iconic status wasn’t truly assured until Wheeler himself took one of the finished prototypes home for the night and, on his return, declared it too powerful and wild for the road. Production plans were canned, deposits returned and the remaining prototypes broken up for spares to service the race cars. Except for one. In August 2003, TVR placed an ad for a Speed 12 with the registration W112 BHG. At this point, a complete car didn’t actually exist. The plan was to build the best car it could around the remaining road car prototype chassis and sell it to an enthusiast personally vetted by Wheeler. So that’s what happened. An obvious bonus was that it used the carbonfibre bodyshell from one of the GT racers with downforce aerodynamics. Another was that its new owner was happy for evo’s  John Barker to drive it (079). JB memorably summed-up the Speed 12’s acceleration in one word: terrifying. The car is still with the same owner, who has worked with the original TVR race engineers to optimise its performance – they’ve remapped the only ‘bucket head’ engine and replaced many components with machined titanium. It now weighs less than 1000kg and has a measured 830bhp. Wheeler’s dream of Speed 12s roaming the earth, putting the bite on XJ220s and F1s, never did come true, but Ben Samuelson, TVR’s head of PR at the time, didn’t see the endeavour as ill-conceived: ‘Peter was never happier than when designing and building things with the quite brilliant engineers he surrounded himself with. The Speed 12 was the ultimate expression of this – a car whose only reason for being was because Peter could do it. And, yes, it really did blow up the dyno.’