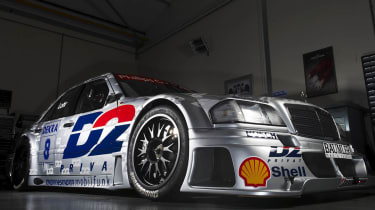 Back in February we featured the restoration of a 1994 Mercedes-Benz DTM car, one of the most complicated race cars ever built. The restoration is now complete and the car looks simply stunning. Here Patrick Morgan of Dawn Treader Ltd explains some of the complexities of getting the job finished.

‘The final build of the Mercedes was certainly an intensive program. To give you some perspective of the complexities of the car, a typical Formula 1 car restoration takes us between 2000 and 3000 hours to our standards which are admittedly time-intensive to achieve. The DTM car has taken over 5500 hours. I feel immensely lucky to have been given the chance to restore this car properly, to be able to focus on originality and making sure all the active systems work.

‘From a technical perspective running the engine on the test bed was one of the most satisfying aspects of this project. We have had to replace almost all the major components with only the crankshaft and the gear train remaining. We have made a huge effort to ensure the components we have replaced are faithful to the originals but nevertheless it was a fairly daunting moment when the engine was fired up for the first time. I’m pleased to report that in spite of an ignition issue that was swiftly cured with a new spark module, the engine ran perfectly. One of the rather troublesome aspects for bench testing is the idle which is set at 5000rpm to protect the output shaft from torsional vibration. The engine is very reluctant to run properly below this speed with any load applied so having it connected to the dyno during start up was problematic but once running it pulled very well and achieved 441bhp.

‘The first time the engine is installed into the chassis much of its mounting system has to be set up very accurately. The mounts themselves are eccentric and the steering column keyways have to be matched – a tricky job in such a confined space. Once this has been done the engine can be easily withdrawn and reinstalled. I can completely believe that a well-drilled team can do this in under 15 minutes.

‘One of the standout aspects of this car is its paint scheme, which I love. It is however something of a nightmare to apply so many stickers. In all I worked at it for 10–12 hours a day for seven days. The grey D2 stickers show up any imperfection so had to go on perfectly first time – so I ended up doing most of them at least twice! It’s not a job I would wish to do every day but I’m pretty proud of the outcome. I have to say Becker Design Gmbh, the company that produced the vinyls, do make a very high quality product and were extremely helpful.

‘Putting the car back on the ground is always something of a special moment and this one was no different. After 18 months of being in the air we had all forgotten just how low it is to the ground. Having done a lot of system checking on stands we felt pretty confident that the car would run without issue for the shakedown which took place on the 1000m runway here at Sywell. This proved to be the case much to everyone’s relief. Having now completed the weekend at the Goodwood Festival of Speed, which significantly from an electronics point of view, is a hillclimb, we can now start looking towards circuit running. For this the car requires a lap trigger to reset the lap distance (which is calibrated in centimetres) so as the roll bars and gill flaps know when to adjust themselves.’