The Infiniti Emerg-e has evolved into a meaningful and fully driveable prototype. evo drives it 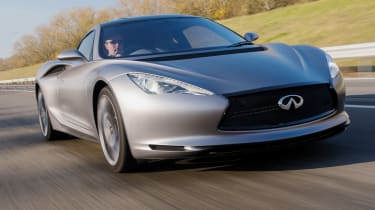 A gleaming concept car, a private test track and an early opportunity to get behind the wheel. Stop me if this is getting familiar: pretend drives of not-quite cars have become a staple of a certain type of motoring journalism over the years, the chance to blow some froth over a cool new model without the boring necessity of waiting for it to get signed off, let alone built. It leads to stories full of euphemisms like ‘on the road’ or ‘behind the wheel’, carefully chosen to disguise the fact that the car in question is made from spit and plywood and is unable to break the 30mph barrier. And as long as the pictures look convincing – if necessary by Photoshopping out the tow ropes – then who cares?

We do, of course. evo has never fallen for these ‘almost drives’ and we’re not about to start. The Infiniti Emerg-e is a concept car, but it’s also a fully driveable prototype. And although the Millbrook Proving Ground definitely isn’t open to the public, it’s a good enough facsimile of a proper road to have been the location for plenty of filming and photoshoots – this is where 007 spectacularly binned his DBS in Casino Royale. Most importantly, this is a proper drive: I’ve got two hours with the car to do pretty much what I want.

In the last issue we named the Emerg-e as our favourite concept of 2012, and with good reason. The appeal is far more than skin deep; beneath that swoopy carbonfibre bodywork is a production-viable petrol-electric powertrain, developed by Lotus and promising 449bhp, a 4sec 0-60mph time, just 55g/km of CO2 emissions and a claimed 300-mile range. In a world where the motor industry’s collective view of the future often seems dull, green and underpowered, the Emerg-e is a reason to be optimistic.

I should start by thanking you personally for helping to build this car. Because, if you pay your taxes to Her Majesty’s Exchequer, then you were partially responsible for the creation of the Emerg-e. Infiniti, Lotus and Jaguar made a joint bid to the government’s Technology Strategy Board – which ploughs our hard-earned cash into ‘stimulating business-led innovation’ – to fund the development of ‘range-extender’ architecture. The resultant grant paid for Lotus to develop a petrol-electric version of the Evora, with Infiniti then using a slightly modified version of the same platform here. We’ll see the fruits of Jaguar’s labour when we finally get to drive the C-X75.

Alongside the original Geneva show car, Infiniti built two driveable ‘dynamic prototypes’, with the brief that they had to deliver a similar driving experience to a full production vehicle. Interestingly, bar an abortive mid-engined sports car that never made production in the 1980s, the Emerg-e is the first mid-engined car ever made by the Nissan group.

Underneath is a stretched version of the Evora floorpan – the Infiniti has a 50mm longer wheelbase but is otherwise identical. Last month Stephen Dobie had a brief go around Hethel in Lotus’s version, the Evora 414E – but this is the first time we’re getting what could be termed a proper drive.

This may not be the pretty show car, but in the carbonfibre it looks pretty much identical. Apparently the body panels are slightly different: the dynamic cars have to sit on the ‘hard points’ of the Evora’s chassis, so it’s slightly narrower. Oh, and it’s gained a rear wing, the result of time spent in the wind tunnel – another sign that Infiniti has been taking development of a car unlikely to be driven by more than a couple of dozen people very seriously…

Into the cabin, over the familiar wide Lotus sill, and the level of detail remains impressively high. Unsurprisingly, a fair amount has come straight from the Evora, including the instruments and heater controls, but there’s a new carbon-faced dashboard and matching trim for the doors, plus a central display screen that springs into life as the ignition is switched on. The stipulation that the car should feel real means that everything works: heater, air-con – even indicators and wipers.

The Emerg-e is what’s sometimes called a ‘series hybrid’. Drive is delivered to the two rear wheels exclusively by electric motors, which are fed by an on-board battery pack that can be recharged from the mains. But, in addition, it has a ‘range-extending’ petrol engine – in this case a 1.2-litre three-cylinder producing 47bhp – which serves as an on-board generator to recharge the batteries on the move. Infiniti claims peak power is 402bhp, but we know from the identically driven Lotus that, with everything charged, 449bhp ought to be possible.

Turning the ignition key produces nothing more than a soft clicking as the high-voltage electrics turn themselves on. ‘Drive’ is engaged via a button on the centre console – like most ’leccy cars, it’s a single-speeder – and, with gentle throttle application, we move off silently under pure electric power. We’re starting with a couple of runs down Millbrook’s mile-long straight (to get some pictures of the car before I dirty it up), which are gentle enough to mean the range-extender stays silent. Apparently the Infiniti can travel up to 30 miles in this ‘pure electric’ mode.

First impressions are, unsurprisingly, Lotus-like. There’s the same weight to the steering and the same sensation of mechanical grip, even when doing nothing more than trundling along for the camera. It’s quiet, too – for now, at least – without even an electric hum. But just rumbling over pothole covers it feels heavier than an Evora for the simple fact that it is. The mass of the battery pack brings the total weight up to a claimed 1598kg – 216kg more than a basic petrol Evora – although even that figure doesn’t really tally as it suggests the Emerg-e is 161kg lighter than the electric Evora 414E…

The smoothness of the electric side of the powertrain makes what happens next a shock. As the battery level starts to drop, the petrol engine bursts into life. Loud, loud life. It’s a busy, industrial noise – like what you’d expect from a portable generator. And because it’s not linked to the pressure on the throttle pedal, it seems more intrusive and alien. It certainly doesn’t belong in a sports car. According to the Lotus engineers who worked on the 414E, the engine racket will help showcase their ‘Halosonic’ active noise-cancelling tech.

The Emerg-e goes into this generating mode to extend the effective range of its battery pack. It’s a necessary evil and a fairly constant presence. Whenever you demand more than a certain amount of power or the battery charge drops too low, the engine fires up automatically. And moving onto the contours of Millbrook’s ‘Alpine’ hill route gives it a constant workout.

Fans of electric power are always singing about the fact that it effectively gives you full torque from a standstill, but the real advantage when it comes to real-world driving is the capacity for instantaneous response: no waiting for gears to slot home, turbos to spool up or revs to rise into a power zone. Acceleration is just there. The Emerg-e takes off up the first section of Millbrook’s pseudo-Alps so quickly that, when I realise the first corner is sharper than I recall from my last visit here several years ago, I’m travelling a fair bit more rapidly than I’d like. The brakes bite hard, everything stays straight, and I make a second attempt to turn in at a slightly less optimistic speed.

The Evora underpinnings help, of course, although the Emerg-e’s extra mass makes it feel quite different when you turn up the wick. There’s less front-end grip in slower corners, the nose running wide earlier than it would in the Lotus. But, on the quicker corners – and especially Millbrook’s savage descents – it feels more solid, less adjustable, but more planted. And it’s properly quick: I’m having to lift off and touch the brakes to stop catching air on the bump that did for Bond’s Aston. I can honestly say I’ve never driven a concept car like this.

But the Emerg-e is a concept car, a point reinforced when, after nearly an hour of playing on the hill route, we opt to switch to Millbrook’s high-speed bowl to find out what she’ll do. Except she then conks out on one of the link roads with a fault light showing on the dashboard. We grind to a halt and adopt the standard control-alt-delete procedure for modern cars – turn it off and on again – and it goes another 100 yards before shutting down again. With the technical crew suspecting that the battery pack has overheated, my drive is over and the Emerg-e heads off to the garage for a tactical re-fettling.

This emulated the Emerg-e’s run at the Goodwood Festival of Speed in July, when it failed during its first-ever public run and briefly immobilised itself on the hill (apparently the racing driver in the hot seat confused it by left-foot braking). Infiniti caught a lot of flak for that, but my first instinct then – as now – was to salute the company for having the balls to create something intended to be used hard and run the risk of giving it to somebody with orders to do just that.

Sadly, this is where the story ends – for the Emerg-e at least. After looking at the numbers, Infiniti has decided it can’t justify putting its electric sports car into production. It’s an interesting vision of the future, but nothing more than that. Which leaves Infiniti as a brand still looking for its halo model.