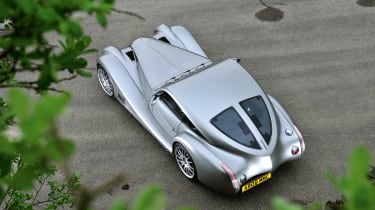 or years, decades even, nothing very much changed at Morgan. Occasionally they’d introduce a new engine, though often only because the last one had gone out of production. But then, round about the turn of the millennium, things started to change. First there was the Aero, with its extruded aluminium chassis and BMW V8. But even that couldn’t prepare us for what came next.

evo got its first taste of the AeroMax in 2005, just after its debut at the Geneva motor show. Designed by Matt Humphries, a 21-year-old design student, that first car was a one-off created for a Swiss banker who’d funded most of Morgan’s GT3 racing. After the reception it received at the show there was never any doubt that more would be made.

The sensation through the steering wheel was much like the impression given by the view over the bonnet, that the front wheels were a long way out ahead. You had to think slightly further down the road than you were used to, and pour the distant nose of the car into a corner sometime before you – sitting over the back wheels – actually arrived there.

There was something indefinably vintage about the experience, but as the miles slipped underneath you the Morgan revealed a very modern level of grip. So all that creamily delivered BMW urge was certainly exploitable. And very engaging.

Wealthy enthusiasts including Richard Hammond and Rowan Atkinson clearly agreed and bought AeroMaxes of their own. The production run, limited to 100 cars, ended in 2010, but the AeroMax effect will last a lot longer.