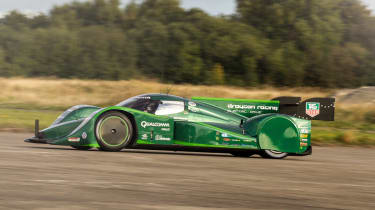 Following the announcement earlier this month of a strategic partnership between Drayson Racing Technologies and Michelin, Lord Drayson was successful in his bid to break the World Electric Land Speed Record for a car under 1,000kg by posting an average of 204.185mph over two runs completed within one hour.

Michelin’s LMP1 tyres recently helped Audi to victory in the 90th Le Mans 24 hour race, the second in a row for a hybrid car, and last week the same tyres carried Drayson Racing’s electric race car to a new electric land speed record. The Drayson B12 69/EV electric Le Mans Prototype smashed the previous 175mph record, which had stood for 40 years, by 29.2mph. The record-breaking run took place at Elvington Airfield near York.

The Michelin tyres used by Drayson Racing were confidential-specification LMP1 tyres which have been developed for the sustained high speeds encountered in endurance racing and were designed in association with world-class endurance racing teams. The sizes were 33/68-18 front and 37/71-18 rear. The tyre design chosen for the record attempt offered performance characteristics optimised for the conditions of the challenge and followed Michelin’s Total Performance ethos by managing to combine these often conflicting requirements.

They needed to offer low rolling resistance to reduce battery drain; high traction levels to enable the car to accelerate to maximum speed as quickly as possible; good stability to enable the car to safely run with minimal down-force; and excellent braking performance to ensure the car could be stopped safely before the end of the runway. The Drayson B12 69/EV will be making an appearance at this year’s Goodwood Festival of Speed (11th-14th July) where Michelin are sponsors of the Supercar Paddock and Supercar Run for the second year running.

This feature was originally published in July 2013.