Car enthusiast Dion Price introduces himself to Your evo Year, and outlines what motoring adventures are planned for this year 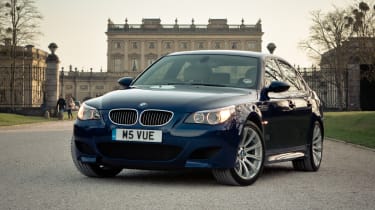 Having been car mad from a very early age, evo has naturally been a great source of automotive inspiration and financial perspiration! A case in point: my most recent car-buying challenge was last year, following my return to the UK after a four-year absence.

My now wife and I left the UK in 2009 as a newly engaged couple bound for Australia, having just sold a Boxster S (hers), a Renault 19 16v track car (his) and placed a BMW E46 M3 Convertible into storage (his). Four years, three countries, two kids and one wedding later, we returned to the UK.

Convertible shopping was out and four-door practicality was in. A nicely specced Merc C-class or an Audi A5 Sportback were on the cards, both running on the devil's fuel in an effort to start being a little more practical about running costs and the like. But nicely specced cars that didn’t have Starship Enterprise mileage were proving hard to come by and prices were strong to say the least. The search dragged on into the New Year.

As any close watcher of the second-hand performance car market will know, January is like the witching hour as some gloriously pampered machinery gets thrown onto the market in a fit of adherence to some hastily made New Year's resolutions. It didn’t take long to shelve the social guilt that was leading me towards a nice sensible diesel and start perusing the classifieds for something more interesting…

Diesel econ-o-boxes were overlooked in favour of a brace of 400bhp+ supersaloons. Already being a long-term BMW M-car owner, my gaze quickly settled upon the 500bhp E90 M5 as it represented a monstrous amount of performance for the money.

I found a lovely low-mileage example that had spent much of its life as a pampered third car and which had the essential full BMW service history and a fat folder of accompanying receipts. One spine-tingling test drive and a wad of readies later and the car was mine.

The M5 was brought home to join the rest of the family fleet, which currently comprises my 2002 BMW M3 that had been extracted from storage following the return to the UK and the new track weapon/fun chuck-around car, a Peugeot 306 Rallye – one of only 100 white examples registered.

The M5 is our main family car (yes, at 16 mpg!), the M3 comes out when the weather isn't too terrible and the Rallye deals with the rest, including the odd commute, tip runs and, of course, trackdays, where it really comes into its own as a beautifully balanced thing that manages to embarrass much more modern machinery.

My plans for the summer

Having lived overseas for a while, one of the great things that we often overlook in the UK is the sheer variety and calibre of motoring events that we have access to in the UK. Being back on home soil for the first summer in a few years, I have lined up a fairly full calendar of events that I have been missing out on for a while.

First up is a trip down to the LeMans 24 Hours next weekend. This will be my fourth visit to this event and it is certainly a huge annual highlight. A group of approximately ten of us go down each year in a small convoy of performance cars and it is simply a riot from start to finish.

The trip down amongst the other 60,000 Brits, camping in the track infield, ambling about the open pitlane on Friday, following the drama of the race unfold over the 24 hours and creeping through the undergrowth to get to the Mulsanne straight for a ringside seat of the cars hammering past your nose at 200mph in the pitch black are all simply awesome. If you have never been, I implore you to carve some time out for what is one of the petrol-head ‘must do before you die’ events. More on this trip over the next few weeks.

Here are a few of the other events I am planning to get to over the summer, but I would love to hear from folks who feel I am missing out on a killer event and I’ll do my best to negotiate an extra day release pass from Mrs P.