Dion gets everything in order for his trip to the Le Mans 24 Hours in the BMW M5, which includes fitting some new Ring Taxi stickers 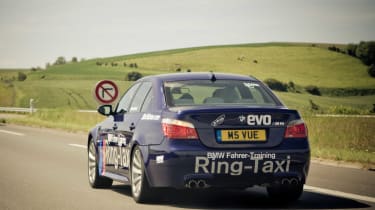 The summer of motoring fun kicks off with a huge bang this week with a trip down to the Le Mans 24 Hours. Not wishing to peak too early, but this really is the highlight of the motoring year for me for so many reasons.

Firstly, it tends to be the only chance all year that my mates and I get to spend more than an a few hours together in one go. This gives the occasion the mild aura of a stag do as event planning progresses. Much hilarity ensues as the mental age of the group quickly descends into single digits the closer we get to the actual event.

Days before the pre-dawn first leg to Dover, the preparations generally begin with a poorly planned team meeting at a local camping shop. After 15 minutes of wandering aimlessly around the shop, we usually realise we have everything we need from last year and retire to the pub for several hours of beer consumption training. Texts from wives and girlfriends are met with a standard four-word response: “Busy, Le Mans planning.’

Car decor is an important Le Mans element that has gradually evolved for the team over the years – the first time we went we clearly telegraphed our status as Le Mans virgins by driving down sans stickers. This year, however, we have my E90 M5 and my good mate Simon ‘Westo’ Westerman’s E92 M3 Limited Edition decked out in full Nürburgring ‘Ring Taxi’ decals. These were professionally replicated, printed and fitted by the guys at slicksticker.com. And having been bestowed the honour of writing for evo.co.uk this summer, the remaining panels were adorned with lovely (not to mention, massive) evo stickers. It’s all a bit of fun, of course, but hopefully you will agree that the overall effect is pretty cool.

This is not a viewpoint shared by my wife, however, as she has refused to drive the M5 since the stickers went on! Any hope of retaining a few decals on the car post-Le Mans have been subsequently dashed. Unmarried M3 drivers seem to have more luck as Westo’s car will retain the Ring Taxi look for at least a few weeks afterwards.

The third car in our convoy will be Kyle Turner’s box-fresh BMW M235i, delivered just two days before we departed for Le Mans. There was no time to get that one seriously stickered up, sadly, and fresh paintwork is usually best left unmolested for a few months anyway.

The day before we are due to leave, a very pleasant email from the lovely guys at Michelin informs me that there is a brand-new set of Michelin Pilot Super Sports ready for the M5 down at ATS. John, the manager of its Reading branch, squeezes the car in and even fits the new rubber himself. More on these tyres next week, but I must mention the Pilot Super Sports are simply phenomenal.

As I live closest to Dover, all the guys assemble at my place the night before our Thursday morning crossing. Beer-drinking practice resumes and much swearing ensues as we list the various things we have forgotten to purchase. A handful of the guys pack, unpack and repack the cars over the next few hours in a vain attempt to fit 20 per cent more luggage than the cars can actually hold. The majority of the group stand back drinking beer and offering helpful advice as to where things should go while making no attempt to help. Then, as the cars are finally locked up we, scatter across floors, beds and sofas for a few hours rest.

We’re up again at 4:45am. A splash-and-dash shower, half a cup of tea and a rich tea finger later, we are rolling off the drive for a steady journey to the port. The early rush-hour M25 contains only a handful of fellow Le Mans pilgrims. As we peel off and connect to the M20, however, there are plenty of grins and thumbs up exchanged with like-minded petrolheads who have grown significantly in number.

Parking up at the port gives us a first chance to get out and have a wander around a few of the other cars in the adjacent ferry-loading lanes. Nods of appreciation are doled out in equal measure for supercars, hot hatches, Q-cars, rain gear-clad nutters in Atoms and various originally decorated pieces metal. On board the ferry there is time for a quick fry up, a cup of coffee and maybe ten minutes of shut-eye before docking in France.

The long drive down through northern France literally and metaphorically whizzes by with our convoy gaining lots of smiles, nods and waves from fellow race-goers converging on Le Mans from all over Europe.

Petrol, GoPro camera adjustments, Supermarché camp supply shopping and a fantastic lunch on the village square in Gacé punctuate the journey through the French countryside in blazing sunshine and temperatures in the high 20s. Perfect. And despite its deficit in power, the junior M comfortably holds its own on the way to Le Mans, mainly drawing upon its healthy torque advantage over the M3.

The revelation this year however has been Michelin’s new rubber. Maximum attack launches out of toll booth gates, triple digit motorway speeds (in km/h of course) in changeable weather and those slightly alarming off camber French B road roundabouts all see the car remain as calm as a coma. Now I’m no Darren Turner, but the additional levels of confidence the Super Sports deliver allow me to stay well in touch with the more nimble machinery in the group. Keeping up with the M3 through the twisties normally requires a tighter grip on the wheel, an unblinking thousand yard stare and a quietened stereo in the cabin. Not today! Good job Bibendum.

Eight hours, 400 miles and a 19mpg average later, we are welcomed into Camping Vert by the guys at the Airtrack village, a fantastic facility in the heart of the circuit area, complete with its own bar, hot showers and giant screens to catch up on the race action while away from trackside.

As we have been coming to Le Mans for a few years now, our camp set-up looks fairly professional with dedicated dining, sleeping and parking quarters (we also have fairy lights!). The mechanics and technically minded members of the team erect the tents while the more managerially experienced ‘supervise’ proceedings and keep the beer supply chain operation running smoothly.

As darkness falls we head over to the circuit to soak up the electric atmosphere, get our first look at the cars on track and have a wander around the circuit ‘village’ which has some lovely classic and current performance metal on display.

The warm weather has drawn massive crowds for a Thursday night and the place is truly alive with anticipation for the race. Toyota and Porsche have put some manners on Audi this year and dominate qualifying, dropping the reigning champions down to fifth and sixth.

With the predictions of Audi’s dominance at Le Mans finally being challenged this year seemingly holding some water, for now at least, this year’s race is set to be an absolute corker! More next week…