Michelin We Are Racers: Episode 3

It's all been building up to this: the mid-season showdown at the Le Mans 24 Hours. Episode three of Michelin's We Are Racers here 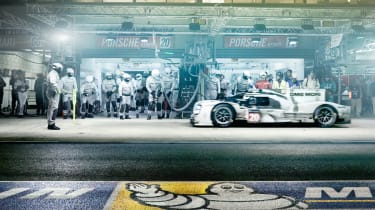 The third and final Michelin and Porsche video peeks behind the Porsche garage doors to evaluate the challenging weekend of the 2014 Le Mans 24 Hours. Fear, excitement, hope and pain circulated through the team across the race as the German marque embarked on a mission to take back the most iconic endurance crown after a 16 year absence.

Early dominance by Toyota meant Porsche’s hopes of stealing what would have been an unexpected win had already begun to fade long before nightfall. But with a heavy downpour gifting the team a chance to take advantage of the full wet Michelins, any predictions for the race’s results were swiftly thrown into the air.

Young charger Brendon Hartley put in some strong performances, with the experienced Mark Webber performing as you’d expect a world class F1 winner to do so. Incidents, changing conditions, mechanical failures and driver errors meant with three hours remaining, Porsche were actually leading the race. But the legendary race’s most successful marque knows not to celebrate until the chequered flag is passed, something proved as Webber’s leading Porsche crawled to a halt and out of the race.

Though Porsche didn’t come away with the result it’d hoped for, as is evident by the video, Porsche and Michelin did everything in their power to to grab that dream result. Michelin did take control of every podium step of every class though, cementing the tyre maker’s dominance in endurance racing. And if the video shows anything, it’s that both Porsche and Michelin will be back next year, to take on winners Audi once again.